In the Grade II 2014 Jerome at Aqueduct in New York, Noble Moon took first place, with Scotland in second and Lawmaker in third. The race is one-mile and 70 yards long for 3 year-olds and has a purse of $200,000. Noble Moon was ridden by jockey Irad Ortiz, Jr. in the 2014 Jerome Stakes and is trained by Leah Gyarmati. 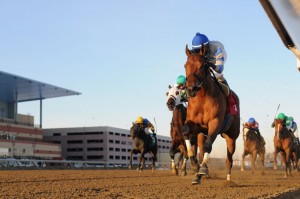 Noble Moon took the lead and the win by pulling away down the stretch in the 2014 Jerome Stakes at Aqueduct. Noble Moon was able to break from the inside post and move past Scotland. Noble Moon demonstrated to be a sure bet as he came into the race as the 4-5 favorite and proved everyone right. Noble Moon pulled away from the pack with only 100 yards of the race left and took a substantial two length victory. Noble Moon posted a time of 1:45.08.

The 2014 Jerome Stakes is Noble Moon’s second win in 3 starts. This win earned Noble Moon a valuable 10 points towards a start in the 2014 Kentucky Derby which takes place in May.

Noble Moon rode against seven other horses at Aqueduct, and it was actually the first time that Irad Ortiz Jr. has ridden Noble Moon and it was the first stakes win for Noble Moon. Ortiz said of Noble Moon’s race, “He broke a little slowly, but then he put me in the race…He’s got a big, long stride. I asked him at the quarter-pole and he picked it right up.”

It is unknown at this point whether or not Noble Moon will race in Aqueduct’s Withers Stakes on February 1st, as owners Treadway Racing Stable and trainer Leah Gyarmati may choose to just race Noble Moon in the Gotham Stakes in March which brings in a $500,000 purse; either way though, Noble Moon has proven to be a strong contender for the future.

Look Fancy in Brocade at the Sham Stakes