The 2012 Kentucky Derby Contenders have been a little tricky to predict. There are a lot of loose cannons running this year. If you are a fan of  LadyAndTheTrack.com, you’re aware that this website is a guide for beginners at the track.

Below is a breakdown of each of the 138th Kentucky Derby Contenders and why they are my favorites. Remember to pick your favorite 2012 Kentucky Derby contender with your heart and never gamble with your lover’s money. Good Luck!

2012 Kentucky Derby Contenders are in below in post position order.

01 Daddy Long Legs with 30-1 odds: Daddy Long Legs is officially the “black horse” contender of the 2012 Kentucky Derby. He’s the leader of the long shots. Three-year-old Daddy Long Legs and jockey Colm O’Donoghue are ready to bust out and take this race since it’s their last shot. The big money definitely will come to those who are brave enough to place a bet on Daddy Long Legs. You just gotta ask yourself if you can feel it in your heart.

02 Optimizer with 50-1 odds: Optimizer is the biggest long shot in the 138th Run For The Roses. His owner and trainer are simply happy Optimizer has a chance to run in the 2012 Kentucky Derby. He’s never finished better than fourth at Churchill Downs.

04 Union Rags with 9-2 odds: This horse has NEVER finished worse than third in any race. He didn’t shine at the Florida Derby but he still is one of the hottest contenders in the 138th Kentucky Derby. My brain (not my heart) has a sweet spot for Union Rags and I’ll probably place a large amount of grocery money on him. Most experts agree that Union Rags will “Place” (for my beginners that means he will finish in first or second place). They all say that Union Rags has the speed but not the heart. My personal conflict with Union Rags is that his jockey is a shit talker.  Frenchman Julien Leparoux, the shit talker, usually lacks heart, which we all know is an important ingredient to win the Kentucky Derby. Michael Matz, however, has trained Union Rags. Trainer Matz also trained the 2006 Kentucky Derby winner and legend Barbaro, who later was put down due to a shattered leg. Trainer Michael Matz and Union Rags may bring their spirit and heart in honor of Barbaro.

05 Dullahan with 8-1 odds: Dullahan is the stepbrother of Mind That Bird! He runs well on dirt. Dullahan can go the distance but needs to have a fast start. Most predictions state that Dullahan will be the winner of the 2012 Kentucky Derby but he’s a dangerous bet.

07 Rousing Sermon with 50-1 odds: Rousing Sermon is a late running colt. His owners decided to run him in the 2012 Kentucky Derby simply because the opportunity presented itself. Trinniberg’s hot pace is expected to enhance Rousing Sermon’s performance.

09 Trinniberg with 50-1 odds: Trinniberg is a dark bay colt that wears bright yellow colors with decorative red pom-poms. Odds are not favorable for Trinniberg but he may shock and rock this 138th Kentucky Derby. He’s a fast paced starter. Trinniberg may exhaust the more talented horses by setting a fast pace in the beginning of the race. Most are concerned that he simply can’t go the distance. 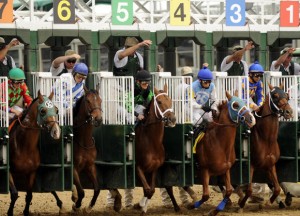 11 Alpha with 15-1 odds: First of all, I can’t imagine how there has never been a racehorse named Alpha before. Alpha is another one of those “loose cannons” I referred to before. He’s showed great improvement in all the 2012 races but his workouts have come under great scrutiny by the experts. My only feeling about Alpha winning the 2012 Kentucky Derby would be that it’s going to be a long shot. Alpha is absolutely gorgeous though.

12 Prospective with 30-1 odds: Prospective is another long shot for the 2012 Kentucky Derby. The experts agree that he cannot compete with the strong contenders. His form is still juvenile although he runs well on dirt.

13 Went The Day Well with 20-1 odds: This horse is trained by the 2011 Kentucky Derby winner Animal Kingdom’s H. Graham Motion. He also has experienced jockey John Velazquez. Went The Dry Well is said to have an exceptional amount of stamina. I like the vibe of this horse and his trainers.

14 Hansen with 10-1 odds: I’m not sure if you’ve seen the video of Hansen clowning around in the dirt at Churchill, but any horse that preps like that is a winner in my book. You won’t be able to miss Hansen’s presence at the 2012 Kentucky Derby as he’s the only white horse contender. Hansen is a symbol of everything good. So if you’re superstitious you may want to put your money on Hansen. The three-year-old colt Hansen beat favorite Union Rags in The Breeders Cup.

15 Gemologist with 6-1 odds: This horse is on a winning streak. Gemologist is a young colt and is expected to at least finish in third place. Most experts agree that he cannot place first against Dullahan and Union Rags. In my personal opinion, Gemologist is in awesome racing shape. He may surprise the experts. Gemologist is probably one of the safer bets. For all my beginners, that means you want to bet on Gemologist to “Show” (meaning he’ll finish in either first, second, or third place).

16 El Padrino with 20-1 odds: This beautiful horse has won the hearts of many fans. El Padrino has one big cut and dry factor though in my book. He races best on a wet track. So if it rains during the 2012 Kentucky Derby, place your bets on El Padrino. I’ll be picking El Padrino to win if it rains. Plus, he’s adorable.

17 Done Talking with 50-1 odds: Done Talking is another long shot for the 138th Kentucky Derby. The experts report that he needs to show significant improvement to keep up with the other contenders. Done Talking has a late start running style that makes most experts doubt his abilities.

18 Sabercat with 30-1 odds: Sabercat is another 2012 Kentucky Derby Contender with a fabulous fan base. He’s had excellent workouts prepping for the Derby on Saturday and is said to really enjoy running the track.

19 I’ll Have Another with 12-1 odds: I’ll Have Another is the party peoples horse. He’s got a great owner who treats his drunken employees well. I’ll Have Another also has one hellava jockey. Jockey Mario Gutierrez is known as “Marvelous Mario” on the Canadian racing circuit. He’s always extremely prepared for every race he rides. The only red flag against placing a wager on I’ll Have Another is that he was never scheduled to have a workout on the Derby track. Eighteen of the last twenty Kentucky Derby winners all had workouts of the track prior to their victory.

20 Liaison with 50-1 odds: Liaison is definitely not a favorite in the 2012 Kentucky Derby. The experts claim that Liaison has been on a slow decline since his last win back in December. He doesn’t go the distance even though he starts out strong.

My Adonis: My Adonis is horse number 21 in a race for only 20 horses. My Adonis will replace any contender that scratches before Friday morning at 9:00AM.