Kentucky Derby Contender Far Right Already a Winner for Moquett: Far Right might be one of the underdogs going into the Kentucky Derby, but he’s certainly not training like it.

Last seen finishing second behind a runaway American Pharoah in the Arkansas Derby (GI), Far Right is currently on the grounds of Churchill Downs being prepped for a start in the Derby. On the morning of April 24, the chestnut ridgling turned in his last workout before the race, getting four furlongs in a solid :49.00. 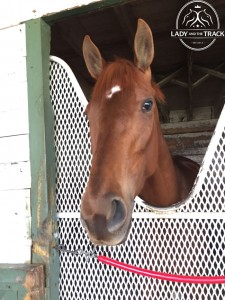 Far Right might be one of the underdogs going into the 2015 Kentucky Derby, but he’s certainly not training like it. Photo: LATT

Chance Moquett, the son of Far Right’s trainer Ron Moquett and head of publicity for the racing stable, reflected on the ridgling’s final work, saying, “The term I heard today was that he skips over it. He seems to be liking the track. Everything is good; he’s happy and sound and he – knock on wood – came out of his breeze great today. That will be his last serious anything, and we’ll just kind of ease him up to race from this point.”

The son of Notional out of the Vindication mare Zindi already seems to have an affinity for Churchill Downs, perhaps an advantage he holds over the majority of the rest of the field. Moquett noted, “He loves the track. He’s already won over it and hit the board in all his races over it.” Those races include a runner-up finish before breaking his maiden in his second start under the twin spires and a third-place finish in the Street Sense Stakes as a juvenile.

Generally, Far Right has been a very happy horse at Churchill Downs, but he hasn’t been in the spotlight of the Kentucky Derby media fest. “He’s kind of under the radar when it comes to the media because my dad didn’t change anything,” Moquett explained. “We’ve just been sending him to the track first set like we always do. We’re on the track at 5:45 in the morning.”

Moquett expanded on that by describing Far Right’s rather excitable tendencies. “He’s a horse that runs with cotton in his ears, so it’s not unlike him to decide to go faster than we want him to run anyway, so for the media to have a hand in that is something he wants to avoid.” Keeping the horse calm, cool, and collected is certainly a solid path to take in the busy days leading to the Derby.

Chance Moquett’s love for Far Right is immediately apparent, and his belief in the ridgling is certainly enough to attract fans to the horse. “He’s the right kind. I love him to death,” he confessed. “He would be my Derby horse even if my last name wasn’t attached to him.

“He’s got every check mark I look for: he’s won over the track, he’s got a rider who’s won the race, and he doesn’t have to have the lead.”

In addition, there’s also a bit of home state pride at stake with Far Right’s performance in the Derby. Since the ridgling was prepped in Arkansas, he has undoubtedly created fans who witnessed his victories in the Smarty Jones Stakes and Southwest Stakes (GIII) at his beloved Oaklawn track in Hot Springs. According to Moquett, “To be 100% honest, being from Arkansas, the owners being from Arkansas, my dad being from Arkansas, the fact that we’ve got a horse in the Kentucky Derby – we’ve already won.”

Perhaps Far Right will double that feeling of victory with a performance of a lifetime in this year’s Kentucky Derby.

Tencendur Set to Run a Monster Effort in Kentucky Derby