Upstart Remains a Top Choice in Kentucky Derby 141: In less than two weeks, three-year-old colts and geldings will be entering the starting gate for the most important and toughest race of their lives. In recent years, we have seen modest horses from both low and high-class owners and breeders win America’s grandest race. Some colts in the field range in value from $1.6 million to $2,500. Whether or not these colts ever repay their purchase price, which most of them, if not all of them, will, their price tags have no influence on their talent or ability to win the Kentucky Derby. 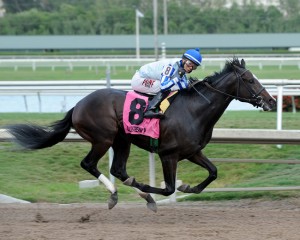 As a Kentucky Derby contender, Upstart (pictured above at Gulfstream Park) is back in serious training after spiking a fever last Saturday, causing him to miss a scheduled workout. However, a week later, the dark bay ridgling returned to the workout tab, breezing a bullet going four furlongs in :47.20 on Friday April 17, 2015.
Photo: Natalie Fawkes, Coglianese Photos

This year, one colt brings trainer Rick Violette back to the Derby. The trainer visited the Triple Crown trail last year with his star colt Samraat, who is preparing to return for his four-year-old season. This year, a $130,000 yearling by Flatter gives Rick Violette a huge shot to get a Kentucky Derby win. However, Violette is no stranger to the big stage. While he does train Samraat, he also trained Grade I winner Dream Run, Grade II winner Read the Footnotes, and Grade II winner Citadeed who was also Grade I-placed in the 1995 Belmont Stakes.

Upstart was bred in New York before being auctioned off at the Fasig-Tipton New York Saratoga 2013 Preferred New York Bred Yearling Sale. Rick Evans bought the Flatter ridgling and sent him to Rick Violette when it was time for him to become a racehorse.

Pedigree suggests that Upstart always intended to be a high quality runner. His sire Flatter was a Grade II-placed miler by Belmont Stakes and Breeders’ Cup Classic winner A. P. Indy and out of the Mr. Prospector mare Praise. Flatter obviously inherited the speed gene from Mr. Prospector, who has become one of the most dominant sire lines in recent times. Flatter is also a full brother to WinStar Farm stallion Congrats. Congrats is the only stallion by A. P. Indy to achieve the title of Champion Juvenile Sire. Flatter, while not the most accomplished stallion, has sired sprinter Kobe’s Back and Flat Out, winner of the Jockey Club Gold Cup at ages five and six.

Upstart is out of the unraced mare Party Silks, by Touch Gold. While Party Silks was unraced, she was bred to be fast as she was out of a Housebuster mare. Housebuster was an award-winning sprinter before he was retired due to an injury that he sustained in the Breeders’ Cup Sprint. He was eventually sold to Japan, and among his offspring is Hong Kong Horse of the Year Electric Unicorn.

Touch Gold spoiled the 1997 Triple Crown when he ran down Silver Charm in the Belmont Stakes. However, he turned out to be a quality racehorse, winning the Haskell Invitational in his next start. As a stallion, he has been less than extraordinary. While he has some accomplished offspring in Seek Gold and Ferrari Pisa, his offspring have not been able to inherit his stamina, winning at an average distance of 6.96 furlongs according to the Stallion Register. Nevertheless, there is evidence that Touch Gold does pass on stamina as he is the broodmare sire of Emollient.

As a Kentucky Derby contender, Upstart is back in serious training after spiking a fever last Saturday, causing him to miss a scheduled workout. However, a week later, the dark bay ridgling returned to the workout tab, breezing a bullet going four furlongs in :47.20 on Friday the 17th. Violette reported to the Gulfstream Park’s Publicity Department, “He did things so easily. He wouldn’t pull up on the backside.” Even Mike Welsch of The Daily Racing Form tweeted after the bullet work Upstart put in, saying Upstart “never missed a beat” and “finished strong on his own.”

Following the workout, on-site vets scoped Upstart, searching for signs of the illness that hindered him a week earlier, but they found nothing. When interviewed, Vicki King, exercise rider for Upstart, stated that the colt was “push-button.” We have seen Upstart’s push-button ability in his previous races. In his seven starts, the Flatter ridgling has never been worse than third, and his only third-place finish was in the Breeders’ Cup Juvenile, which is turning into a key race for some of the big name horses this year such as Carpe Diem (finished second in BCJ).

Upstart is slated to ship to Louisville on April 28, the Tuesday before the Kentucky Derby. If Upstart can pull off a win in two weeks, he would be the first ridgling in history to win the Run for the Roses, and he would be Rick Violette’s first Kentucky Derby winner and his best placing in a Triple Crown race. With the colt’s experience, push-button style, breeding, and will to fight and keep grinding, he has the style and heart to win the Kentucky Derby. Whether or not he does remains to be seen, but with Violette’s style of “not getting in [Upstart’s] way,” he has a fantastic shot. 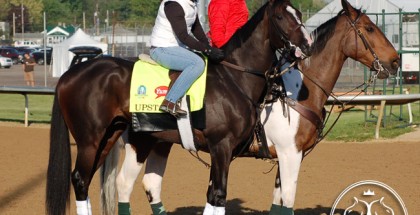 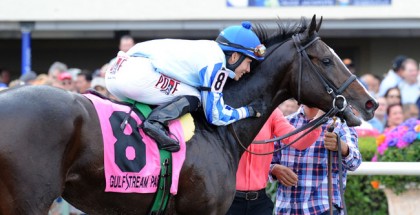 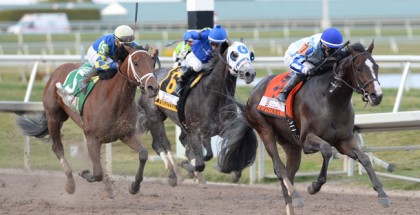 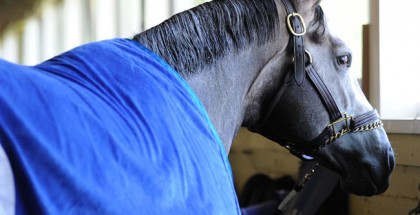