Santa Anita Park Picks & Plays Saturday, March 21, 2015: This week, the Derby Trail moves to Turfway Park for the Spiral Stakes and Sunland Park for the Sunland Derby. However, Santa Anita Park, as usual, offers very competitive races, perfect for trying to hit horses at good odds. We are again handicapping the races we feel most confident about while hoping to hit some exactas, daily doubles, and pick 3 wagers. 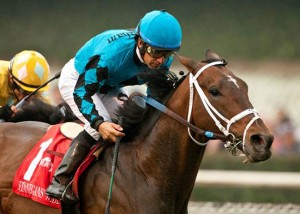 Nextdoorneighbor is a horse under Peter Miller’s watch, and he has successfully moved up in class from $8,000 to $25,000 claiming races with two wins and a creditable third place in his last race. This horse is working very well, and the Espinoza/Miller combo is really hot lately. Senor Rain is moving up in class, and he looked particularly strong in his last win. This horse ran at a tougher level in his early career, so the potential is there. In addition, the very hot Santiago Gonzalez stays in the irons. Buffalo is dropping in class and is also switching to dirt, a surface on which he ran his better races in his native Brazil.

Soul Driver finished fifth in the El Camino Real Derby (GIII) over the Golden Gate tapeta, but now he’s returning to the grass, his favorite surface. Soul Driver was second in the Eddie Logan Stakes in December 27 behind Derby contender Bolo, and if he reproduces that effort, he will be very tough to beat. Bench Warrant is stretching out to a mile, but he looked strong in his last race over a downhill 6-1/2 furlongs. Additionally, it has been proven that he loves the turf since he has two wins over the surface. Considered to be a nice horse since his debut, Papacoolpapacool is trying to win his first stakes race in this spot. He won his last race with authority, and Elvis Trujillo repeats the mount.

Vow me Over has the advantage of experience over the downhill after a race in which she finished fourth, just 3-½ lengths behind Mio Me, a filly that now is running in stakes races. Rafael Bejarano stays in the saddle, so that is a sign of confidence. Dragon Eyes is making her debut after posting very good workouts. If she runs similar to how she trains, this filly could be dangerous. Journeyonthemove is another filly that is making her debut after nice workouts, plus her pedigree suggests she likes the grass.

Finnegans Wake will be the heavy favorite in the main event, the San Luis Rey Stakes (GII) over 1-½ miles, since he is on a winning streak and has the stamina to run all day. Victor Espinoza knows this horse very well, and with a clean trip, this horse will be very tough to beat. For economic wagers, you should use this horse as a single. If you want to try to beat him, the only horse with any remote possibility of defeating him is Power Foot. This horse likes the distance and is eligible to improve a lot with Flavien Prat now in the saddle.