Hielo Repeats the Feat; Wins Gran Premio Jose Pedro Ramirez in Uruguay: Every year in Uruguay, Three Kings Day takes place on January 6th, the most important races of the year are contested. In Uruguay they call it “Mitin de Reyes”, meaning Wise Men Meeting. January 6th is the day everybody goes to Maroñas Race Track to spend the day with the family while watching the races and enjoying all of the events. 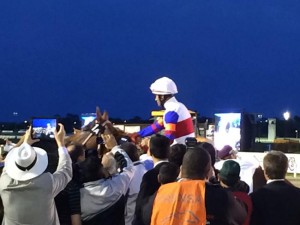 Hielo was received like a Hollywood superstar, surrounded by photographers and journalists after winning the Gran Premio Jose Pedro Ramirez in Uruguay.
Photo: Ines Pereyra Rivero

With the absence of Sir Fever, now in Dubai, the Jose Pedro Ramirez turned into a wide open race, but finally the favoritism went to Fletcher who finished second twice behind the champion Sir Fever. But as the old quote says, to know the winner the race must be contested.

In the start, Esscabio broke like a rocket and pulled away two lengths trying to win gate to wire. Vicenzo was chasing in second place, Fletcher well placed in third, and the “invader” Save The Tiger fourth. In the backstretch Esscabio continued moving the pace, pulled away 4 lengths and the early chasers were struggling trying to catch him. In the stretch, Esscabio continued fighting, but started to feel the effort and finally the winner of the Ramirez 2014 edition, the stalker Hielo appeared and passed him very easily to win the race amid the shouts of the excited people, especially shouting the well known “Hielo Viejo nomá”. In a great race, Whoopee Maker finished in second place, 3 ½ lengths behind the winner. In a sample of heart, Escabbio kept the third place, and All Saints was fourth. The favorite Fletcher didn’t fire this time and finished sixth. The winner was received like a Hollywood superstar, surrounded by photographers and journalists.

Hielo, a son of Holzmeister (Woodman), clocked the 1 ½ mile in 2:27.97, was ridden by Julio C. Mendez and trained by the longtime Socal trainer Pico Perdomo. Hielo’s next goal should be the Clasico Latinoamericano de Jockey Club, to be contested in March at Hipodromo de Palermo, Argentina, a race that attracts the best horses in the region.

In another important races of the card, the filly Santa Guapa won in great style the Gran Premio Ciudad de Montevideo (G1) for Fillies and Mares over 1 ¼ mile. Interestingly, Santa Guapa’s sire, Capitano Corelli, is a full brother of Brujo de Olleros, the Brazilian who was third in the Breeders’ Cup Dirt Mile in 2013.

In the Gran Premio Pedro Piñeyrua at over a mile, Don Oliver H dethroned the champion Steen with an upsetting win by 11 ¼ lengths. Don Oliver H is a son of Hardy (Mr Prospector), a sire without success lately in Uruguay.

In the finale, the also eligible Alevoso, surprised everybody, winning the Gran Premio Maroñas at over 5 furlongs, beating the defending champion Eliot Ness, Aka “The Untouchable”.

The party in Maroñas didn’t finish with the races because the people enjoyed a concert with Lucas Sugo’s good music.

Lady and The Track would like to thank journalist Ines Pereyra Rivero, who shares the photos of the most important day of Uruguayan horse racing. 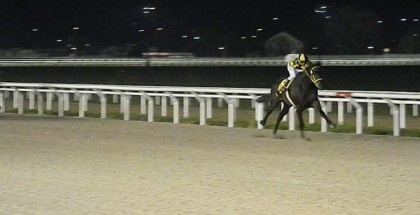