Top Three Finishers of the Iroquois Stakes Should Move Forward

Top Three Finishers of the Iroquois Stakes Should Move Forward: The Iroquois Stakes at Churchill Downs was quite an interesting race on Saturday, September 6, 2014. Mr. Z was the obvious one to beat, but I knew he liked to use his speed, and I figured that someone would pressure his lead, and set it up for my later runners, whom of which were Bold Conquest and Hashtag Bourbon. My long shot pick was the very horse that helped Mr. Z fade to fifth, and set the race up for my late runners: Lucky Player. (Results & Replay Below)

Lucky Player was able to hold on just long enough to hit the wire about a neck ahead of late running Bold Conquest. Once Hashtag Bourbon got out of traffic on the rail, he was just hitting his best stride. He finished third, behind the dueling front two.

The Iroquois, as I discussed earlier in the week (read article here), is a give or take prep race for the Kentucky Derby in May, but the top three of the race should move on, maturing nicely, and taking a lot of experience from the race. Let’s look at the top three of the Iroquois, and I will discuss why I like these three moving forward toward the cavalry charge in May. 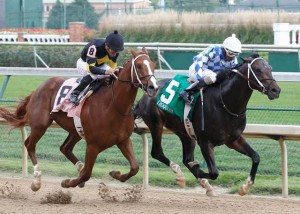 Lucky Player (inside) and Bold Conquest (outside) fight for the finish in the Iroquois Stakes at Churchill Downs on Saturday, September 6, 2014.
Photo: Churchill Downs/Reed Palmer Photography

Lucky Player – first – Lucky Player went on with Mr. Z early, setting nice, honest fractions of :24.41, :49.51, 1:14.82, 1:39.52, and 1:45.76. He was able to outlast Mr. Z, but as the field came into the stretch, Lucky Player was actually second to Bold Conquest. What impressed me, is he was able to look Bold Conquest in the eye, and fight back. I love to see that in any horse, but especially in young horses. Moving forward, the experience Lucky Player gained was vital to his future success. He is going to need those guts he used to fight with Bold Conquest the entire stretch, throughout his entire career. He needs to know how to fight, and how to not back down from a fight. His pedigree is quite lovely, as his sire, Lookin at Lucky, was the 2010 Preakness winner. Lookin at Lucky carried that Smart Strike sire line, which throws every horse imaginable. Lucky Player looks to be able to carry speed over a route of ground. His distaff line has a good doseage of stamina, as it carried Northern Dancer, Seattle Slew, Secretariat, and Storm Cat. This colt was a $175,000 yearling purchase last year, and looks like he will continue to repay his owners for their leap of faith.

Bold Conquest – second – Bold Conquest looked like a real winner coming down that Churchill stretch yesterday. We know now that he liked the surface at Churchill, which could be vital come May 2015. This son of Curlin seems to have everything going for him. He has a good trainer (keeping personal feelings out of this one), a good pedigree, a good jockey, and good connections. Helping Asmussen hit the Iroquois exacta, Bold Conquest will likely be a winner next out. He would have had Lucky Player, had the race been 9F, of even 10F (yes, I am implying what you all think I am)! The pedigree of this colt is one I want to see in more colts in the coming years. By Curlin, out of a Distorted Humor mare, Bold Conquest looks like he could easily continue to stretch out in distance. Through his pedigree, he has Smart Strike, Mr. Prospector, Secretariat, Seattle Slew, A.P. Indy, Forty Niner, and Nashua. I love to see all this blood in this colt. Resembling his sire in almost every way, Bold Conquest should continue to impress.