Iroquois Stakes 2014; a Give or Take Kentucky Derby Prep Race

Inaugurated in 1982, we have seen some very highly regarded horses cross the finish like first, and also, so very unlikely winners. The Iroquois is the first race on the “Road to the Kentucky Derby” prep series. The winner of the Iroquois will earn 10 points, while the next three finishers ear 4, 2, and 1 point, respectively. These young horses are just getting started, and this race is only a small indicator of who will make it to the starting gate in May.

Let us look at history, and if the Iroquois has served as a good prep to start preparing these horses for the biggest race of their lives.

2000 – Meetyouathebrig – Meetyouathebrig was not a very consistent horse in his career. He raced until he was five, but that was nothing out of the ordinary, due to him being a gelding. He did win a listed stakes at Hollywood Park before winning the Iroquois, and went on to win the G3 Derby Trial Stakes. He did not make it to the Kentucky Derby, but he did move on to win another listed stakes or two, before being retired.

2001 – Harlan’s Holiday – Harlan’s Holiday was the unlikely to come to the big stage, as he was bred in Ohio, but he did break his maiden in a listed stakes at Thisledown and two more at River Downs (now Belterra Park). He finished 2nd in the Lane’s End Breeders’ Futurity before getting his G3 win in the Iroquois. He made a lot of noise as a three-year-old, and even entered the 2001 Kentucky Derby as the favorite! He finished a troubled seventh. He would mature, and go on to win the Pennsylvania Derby and Donn Handicap, before retired to stud. He passed away in 2013 prematurely. 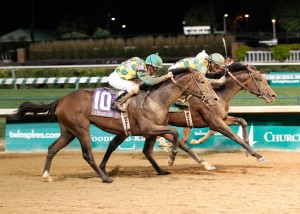 2002 – Champali – Champali won the Iroquois and multiple other stakes races. He would mature through his career to become a very respected sprinter. He would find graded stakes wins in the Smile Sprint Handicap (G3), Aristides Breeders’ Cup Handicap (G3), and multiple listed stakes. He was retired after his four-year-old year and currently is a stallion.

2003 – The Cliff’s Edge – The Cliff’s Edge is a name anyone in horse racing should recognize, and for good reasons. He used the Iroquois as a springboard to win the Kentucky Jockey Club Stakes (G2), and would go on to hit the board in important Derby prep races, such as the Florida Derby (G1), and win the Toyota Blue Grass Stakes (G1) as his final Derby prep. He would find himself finishing fifth in the 2004 Kentucky Derby. He would go on to play bridesmaid for most of his three-year-old career, before being retired to stud.

2004 – Straight Line – Straight Line broke onto the graded stakes scene with his Iroquois win. He would return his three-year-old year to win many listed stakes races, and even win the G1 Ack Ack Handicap at Churchill Downs. He continued to be a listed stakes horse through his four-year-old season, and would be retired after only two starts at five. He is now standing stud. He did not make it to the Kentucky Derby.

2005 – Catcominatcha – Catcominatcha wasn’t but of a racehorse after his Iroquois win. He, actually, never won another race. He would end his three-year-old season prematurely when he did not finish the 2006 Swale Stakes. He fell off the map afterward. He did not make it to the Kentucky Derby.

2006 – Tiz Wonderful – Tiz Wonderful was a fast son of Tiznow, who used his maiden and Iroquois to springboard his wins to three when he went on to capture the G2 Kentucky Jockey Club Stakes. As a three-year-old, Tiz Wondeful found little success, with his best finish coming in the listed More Than Ready Stakes, where he finished second. He retired that year with a 5-3(2)-1-0 record. He missed most of his three-year-old year, so he never same the Kentucky Derby starting gate.

2007 – Court Vision – Court Vision was a very consistent horse through his entire career. He would go on after his Iroquois win to win the Remsen (G2), and take the show spot in the G2 Fountain of Youth and G1 Wood Memorial. He DID make it to the Kentucky Derby, but finished a well beaten 13th. After that, he was tried on turf, where he found a bit better form. He placed second to Gio Ponti in the Virginia Derby. He didn’t fair well in the Travers, so his next start came in the Jamaica Handicap, on the turf, where he turned the tides on Gio Ponti. He would go on to win races like the Shadwell Turf Mile (G1), the Woodbine Mile (G1), and the Breeders’ Cup Mile (G1). He is now a new stallion with a bright future.

2008 – Capt. Candyman Can – Capt. Candyman Can used the Iroquois as only an indicator of what was to come. Only racing four times as a two-year-old, he came back as a three-year-old as a very dominant sprinter. As a sophomore, he would win multiple graded stakes, such as the Hutchenson (G2), Bay Shore (G2), and Kings Bishop (G1), but that is only to name a few. He did not make it the Kentucky Derby, but he made a name for himself anyway. He was a gelding, so he raced until just last year, before retiring to a life of leisure.

2009 – Theskyhasnolimit – Theskyhasnolimit was decently respected stakes horse. As a three-year-old, he won multiple stakes races, including the G3 Texas Mile Stakes. He would race until he was five, where he was last seen in the Mineshaft Handicap (G3). He did not finish the race. He broke down at the half and was vanned on. I could not find any further information.

2010 – Astrology – Astrology used the Iroquois as a breakthrough to the graded stakes scene. He would also use the race as a springboard to place in the Kentucky Jockey Club Stakes. As a three-year-old, Astrology only one race, as he played bridesmaid quite a bit. He did, however, finish third in the 2011 Preakness Stakes (G1). His win finally came in an Allowance Optional Claiming at Oaklawn, at age four. He now stands stud at Taylor Made Stallions in Kentucky. He never made it to the Kentucky Derby.

2011 – Motor City – Motor City peaked in the Iroquois, as he didn’t win another race until this year! Motor City is a graded stakes winner, thanks to his Iroquois win, but now, he is can found in the claiming ranks. He recently has a workout at Delaware Park. He never made it to the Kentucky Derby.

2012 – Uncaptured – Uncaptured was a fantastic two-year-old, winning six of his seven starts, and three of them were listed stakes at Woodbine, and his only fault came in the Grey Stakes (G3) at Woodbine. He did not make it into the Kentucky Derby last year, but went on with his career by winning two listed stakes raced and placing second in a few others. He has made three starts this year, but has only managed to hit the board once.

2013 – Cleburne – Cleburne was an upset winner of the Iroquois, over his stable mate Smart Cover. He is a three-year-old this year, but his record so far is less than satisfactory. He has only hit the board once this year, where he got up for third in the Calder Derby. He hasn’t faired so well since. He did not make the Kentucky Derby.

As we can see, the Iroquois has played both good and bad as a start to the Kentucky Derby. We have seen horses who has faired well in the Kentucky Derby, and other, who have not faired so well. The Iroquois could be seen as a good prep, but it hasn’t helped other. These colts lining up on Saturday have every shot in the world to mature off a win, or a loss, and possibly make it to the Derby in May, and even mature into good older horses.