Tracking Two-Year-Olds of 2015: Now that the Triple Crown races are over, the racing world will shift its attention to the next crop of would-be racing stars. While many important stakes for two-year-olds have yet to be run, there are several winners who have already made a little headway in making names for themselves. Here’s a look at a few of those aspiring runners!

He’s Comin in Hot
Early Flyer – Shocktime, by Langfuhr
For a two-year-old, He’s Comin in Hot has had quite a few starts already. Finishing third, second, and first in his first three maiden special weight starts, he utilized his experience to impressively take the Bashford Manor Stakes (GIII) on Churchill Downs’ final Downs After Dark event of the spring. In front-running style, He’s Comin in Hot denied a rival in the stretch to decisively claim his first stakes victory by 3-3/4 lengths. His pedigree looks to be full of speed – you have to go back to his third dam on his bottom side to find a win over a mile, and even she ended up sticking to shorter distances. Likewise, his sire, his grandsire, and his great grandsire all excelled in races at a mile or less, although Gilded Time was able to take the 1-1/16-mile Breeders’ Cup Juvenile (GI). You won’t likely see this Texas-bred on the classics trail next year, but maybe you’ll catch him taking some sprints. 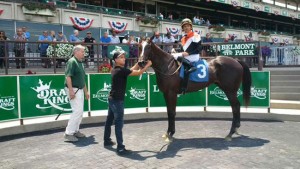 Certainly an splendid surprise to all was Magnolias in Bloom’s dominating victory in her debut. The Belmont maiden special weight turf sprint on June 14 was a brilliant performance by the blazed dark bay daughter of Flatter as she flew to the finish line from the middle of the five-horse pack, picking up her first win by half a length in the new five-furlong track record time of :57.04. Photo: @TheNYRA

Magnolias in Bloom
Flatter – Atrea, by Storm Cat
Certainly an splendid surprise to all was Magnolias in Bloom’s dominating victory in her debut. The Belmont maiden special weight turf sprint on June 14 was a brilliant performance by the blazed dark bay daughter of Flatter as she flew to the finish line from the middle of the five-horse pack, picking up her first win by half a length in the new five-furlong track record time of :57.04. The Glen Hill Farm filly trained by Tom Proctor is also exceptionally well-bred. As far as male influence goes, Magnolias in Bloom is inbred 3×4 to both Seattle Slew and Mr. Prospector, 4×4 to Secretariat, and 4x4x5 to Northern Dancer. Sire Flatter has thrown quite a few good sprinters in addition to progeny that can handle a bit more distance on the dirt. Magnolias in Bloom’s female side is even more notable. Hailing from the great Numbered Account’s descendants, Magnolias in Bloom’s third-dam is Get Lucky, the daughter of Numbered Account’s good runner Dance Number and an important stalwart of the family. Get Lucky is the dam of Grade II winners Girolamo and Daydreaming and Grade III winner Accelerator and the second-dam of Haskell winner and Kentucky Derby runner-up Bluegrass Cat, Kentucky Derby winner Super Saver, and Man o’ War winner Imagining. With a pedigree and a good performance on the track already under her belt, expect to see more and maybe even a dirt start from Magnolias in Bloom.

Hot Ore
Unusual Heat – Barbara Orr, by Tale of the Cat
Making waves in California was the state-bred Hot Ore, a gelded son of Unusual Heat. Trying four-and-a-half and five furlongs on the dirt, he finished third and second in his first two races, respectively. A shift to the turf going a mile seemed to fit Hot Ore quite well, for in that Santa Anita maiden race he took an easy, unchallenged lead. He finished in the slow time of 1:38.88, so in future races it would be nice to see him be pressed to prove his abilities. Turf influence abounds through the presence of sire Unusual Heat, who has had incredible success with turf runners, but there’s a bit more of dirt influence on his dam’s side. His dam Barbara Orr was a winner in dirt sprints and graded stakes placed, and she traces back to Solar Slew, the dam of champion Cigar. Perhaps Hot Ore’s connections will try him again on the dirt now that they know he can handle some distance, but even if not, he may move on to greater things on the turf.

Gomo
Uncle Mo – Gentle Audrey, by Elusive Quality
The Uncle Mo juveniles are looking good, much like their Breeders’ Cup Juvenile-winning sire. Gomo, a bay filly trained by Doug O’Neill, is now among her sire’s first crop winners after performing well enough to break her maiden. She was the favorite her first time out at Santa Anita on June 4, but the fast five furlongs in :57 and change on the dirt seemed to be the wrong surface and too much for her as she faded from the front of the pack to third. Switching to a mile on the turf, Gomo performed splendidly, bounding to the lead out of the gate and relishing the track as she spurted clear by 5-1/4 lengths. Just by looking at her immediate pedigree, Gomo may be her best around a mile or nine furlongs at the most. Her dam won at the same distance on the turf, but her third dam Quinpool ran third in the Kentucky Oaks and preferred such longer dirt races. Aside from those performers, Gomo’s immediate female side is lackluster, but she does trace to foundation mare Grey Flight through her daughter Misty Morn, the 1963 Broodmare of the Year. Gomo’s only fault thus far in her brief career is simply that her maiden win came in a slow time, so seeing how she responds to a faster pace should truly prove her class. It will also be interesting to see if Uncle Mo’s progeny will be as precocious as he was as a youngster or if they will take some time to mature.

Taxable
Tapit – Jackpot Joanie, by Giant’s Causeway
Yet another Tapit baby looks impressive. Taxable, a chestnut daughter of America’s most popular and successful sire, made a smashing appearance in her Churchill Downs debut on June 25 for regular Winchell Thoroughbreds trainer Steve Asmussen. Stalking the leader throughout the beginning of the race, Taxable hit another gear in the stretch to cruise by and win by a solid seven lengths under a bit of urging. With a sire like Tapit, there’s no doubt she’ll at least stretch out to a mile or perhaps even more. Grade III winner Cassatt is a product of the same Tapit and Giant’s Causeway mare cross, and she has succeeded at mile and mile-and-a-sixteenth distances. Taxable’s dam Jackpot Joanie won her only race at a mile, and second dam Here I Go was multiple graded stakes placed at 1-1/16 miles. Her female side boasts of several stakes winners and multiple graded stakes placed horses, and it is at the very least interesting to note that she traces directly to Court Dress, the 1906 Champion Two-Year-Old Filly. Tapit progeny tend to mature quite well, so Taxable can be expected to improve. 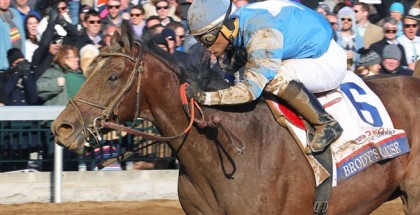 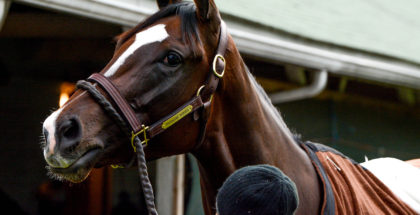 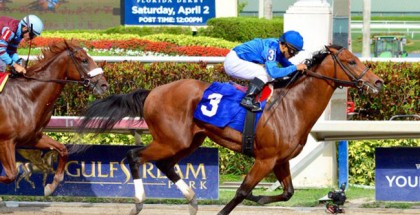