California Chrome Primed to Upset Prince of Wales’s: Racing’s most controversial horse California Chrome nears a start in the Prince of Wales’s (GI) on Wednesday during the prestigious Royal Ascot meet. Despite all the doubt and criticism faced in the past few months, Chrome has a decent chance to make history if the expected field as of today runs. He might even need a win to silence critics, as they are prepared to attack even if California Chrome manages to finish second or third. His most talented expected challenger is Free Eagle, a lightly raced colt with a high, untapped ceiling. 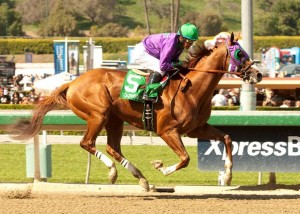 Racing’s most controversial horse California Chrome (pictured above at Santa Anita Park) nears a start in the Prince of Wales’s (GI) on Wednesday during the prestigious Royal Ascot meet. Photo: Benoit

The Princes of Wales’s is run at one mile and two furlongs on turf, or 2,012 metres, which is roughly the same distance as the Kentucky Derby in America. Horses turn right instead of left in this race and go through some minor undulations in the course.

California Chrome’s connections made all the right decisions in how they prepared their horse for the Prince of Wales’s, regardless of whether pointing towards this race was the right decision. This factors into why he can win. They started off with sending him to Newmarket after his runner-up finish in the Dubai World Cup (GI) in order to get him acclimated with the new surroundings early. He also became accustomed to the different methods of conditioning horses overseas with interim trainer Rae Guest.

When the horse arrived at Newmarket, his best interests were being looked out for from the beginning. Originally, the owners wanted to give California Chrome a prep race in the Lockinge Stakes last month at Newbury. Guest recommended against the race and gave Chrome more time to recover from Dubai and train for the Prince of Wales’s, and therefore they skipped the Lockinge. The Prince of Wales’s is only his third start of the season, eliminating any “overraced” discussion.

For those that do not think going to Europe early makes a difference, Verrazano was trained in the European-style leading up to the Queen Anne (GI) at Royal Ascot last year. He finished a credible third, and there is nothing wrong with that.

Besides working out at Newmarket, they also gave California Chrome a spin at Ascot Racecourse with famous jockey Frankie Dettori aboard. After the work, Frankie gave Chrome a positive review and made it clear that he believed the laid-back four-year-old colt would run better in the afternoon. He believes California Chrome will be “competitive” in the Princes of Wales’s.

Since Dettori was not available for the actual race, they secured the services of William Buick, the jockey that won the Dubai World Cup on Prince Bishop. No matter the chances of California Chrome, he should give this horse a proper ride considering his experience as a rider over there.

California Chrome’s turf win in the Hollywood Derby (GI) at Del Mar last fall has been mocked, and not even counted by many non-supporters. There are still comments today on horse forums that this horse shows no wins since his Triple Crown run last fall. Talco ran third in the Hollywood Derby, and recently finished second to South American star Bal a Bali in the American Stakes (GIII). Runner-up Lexie Lou is missing in action since placing second in the La Canada (GII) at Santa Anita. Whether they are Grade I runners is debatable, but they did nothing to disprove Chrome’s ability.

If the expected field holds together, Free Eagle is the biggest hurdle California Chrome must overcome, besides the nuances of European racing. Stuck behind a slow pace in the QIPCO Champions Stakes (GI), the four-year-old son of High Chapparal made a brave move to close for third against pacesetter Noble Mission and the hard-trying Al Kazeem. This colt is highly regarded by rider Pat Smullen, who called Free Eagle “the best horse I have ever ridden” in a Racing UK interview. European betting action shows Free Eagle as the favorite, and he deserves that role. Running off a long break since the Champions effort is one concern.

The other star in the race is The Grey Gatsby, and his form shows significant holes. With virtually no excuse, this horse finished fourth in the Tattersalls Gold Cup (GI) and a distant second in the Dubai Turf (GI). His win in the QIPCO Irish Champion Stakes (GI) was greatly aided by a pace duel. Watch a replay of the race and note the separation between the pacesetters and closing horses. A strung-out field signals a fast pace and The Grey Gatsby ran last early in the race. Even though Australia finished second, Australia ran a better race because he moved first.

Wagering on Royal Ascot is offered online in the United States. Just make sure to wake up early on the west coast. In the American pools, California Chrome is unlikely to offer any value. Americans bet Americans in overseas races, regardless of their form, and he is possibly the second most famous American-based horse in training. Free Eagle needs to overcome the layoff, but if looking to make a quick win bet, Free Eagle is the best horse to use. 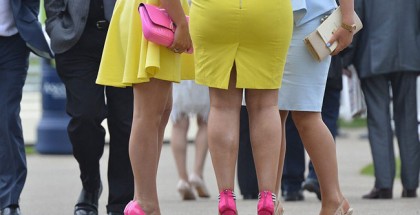