Feathered (Indian Charlie – Receipt, by Dynaformer) seems to have found her forte on the grass. After futilely chasing her talented dirt cohorts in last year’s Frizette Stakes, Breeders’ Cup Juvenile Stakes, and Starlet Stakes (all GI) and this year’s Fantasy Stakes (GIII), Feathered finally found her way to the winner’s circle in the Churchill Downs Edgewood Stakes (GIII) over the turf. In the third fastest time in the history of the race in 1:42.05, the bay filly set the pace the entire way and geared down to cross the wire in first, two lengths in front of favorite and Florida Oaks (GIII) winner Quality Rocks. The victory was Feathered’s first graded stakes win in her first turf attempt for trainer Todd Pletcher.

In the La Troienne Stakes (GI) for older fillies and mares, Molly Morgan (Ghostzapper – Capitulation, by Distorted Humor) avenged her second-place finish in last year’s La Troienne. Following that loss, the six-year-old bay mare regularly met success, including wins in the Fleur de Lis Handicap (GII), Gardenia Stakes (GIII), and Chilukki Stakes (GII) along with multiple on-the-board finishes in between for trainer Dale Romans. Breaking from the eighth post position under Corey Lanerie, Molly Morgan stayed close to the rail while in pursuit of the leaders. Sheer Drama and Gold Medal Dancer chased the winner late, but Molly Morgan was able to hold them off to win by about three-quarters of a length.

Folks figured the Alysheba Stakes (GII) would be Honor Code‘s to lose, and lose he did as he ran much too far back, giving him too much work to do. Instead, the race evolved into a duel to the wire between Noble Bird and Protonico (Giant’s Causeway – Alpha Spirit, by A. P. Indy) with the latter gaining the win by a very close nose. The dark bay four-year-old colt claimed his second stakes victory this year and his fourth overall with this win in the Alysheba. Last seen winning the Grade III Ben Ali Stakes, Protonico closely stalked pacesetter Den’s Legacy before hooking up with Noble Bird down the stretch and winning by a nose, giving Todd Pletcher his second stakes victory on Oaks day under the twin spires.

The Australian-bred and raced Power Alert (Alert – Gold Locket, by Lochrae) claimed his second stakes victory and his first graded stakes win since coming to America in the Twin Spires Turf Sprint Stakes (GIII). Following a rather inconsistent Australian career, Power Alert won an allowance and the Silks Run Stakes at Gulfstream before finishing in fourth in the Shakertown Stakes (GIII). The five-year-old gray gelding would not falter again in Churchill’s Turf Sprint Stakes. Guided by Julien Leparoux, Power Alert shot to the lead at the start and remained there for the five furlongs. Undrafted made a late surge, but Power Alert finished three-quarters of a length in front of that rival.

The Texas-bred filly Promise Me Silver (Silver City – Uno Mas Promesa, by Macho Uno) extended her winning streak to eight in an impressive performance in the Grade III Eight Belle Stakes, and in doing so, she easily proved her class against a solid field of fillies. Her seven prior victories have all come in stakes events at a number of different racetracks, but her win in the Eight Belles is her first graded stakes win. Breaking from the second post position and hanging back from the leaders on the rail, Promise Me Silver eventually moved off the rail to make a wide run down the stretch. Las Virgenes Stakes (GI) winner Callback pursued her and looked to pass her, but Promise Me Silver easily held her off to win by a length.

Trainer Larry Jones and owner Brereton Jones, or simply Team Jones, garnered the lilies of the Grade I Kentucky Oaks with their filly Lovely Maria (Majesticperfection – Thundercup, by Thunder Gulch). In her first graded stakes attempt in the Rachel Alexandra Stakes (GIII), Lovely Maria met I’m a Chatterbox and finished second behind that foe. The bay filly then left the Fair Grounds to sweep the Ashland Stakes (GI) at Keeneland as her final prep for the Oaks. Sent off as the fourth favorite behind Stellar Wind, Birdatthewire, Condo Commando, and I’m a Chatterbox, Lovely Maria broke well and settled four-wide in fourth behind the leaders. She was bumped by Shook Up but was unfazed as she ran down Angela Renee to take the blanket of lilies by 2-3/4 lengths.

Competitive Edge (Super Saver – Magdalena’s Chase, by Cape Town) did much more than edge out his rivals in the Pat Day Mile Stakes (GIII), many of whom were once Kentucky Derby hopefuls. The bay son of Super Saver was a Derby contender himself after a 5-3/4-length win in the Hopeful Stakes (GI) as a two-year-old, but an injury sidelined him. With a prep and a win in this year’s Tamarac Stakes at Gulfstream, Competitive Edge was ready for the Pat Day Mile. Competitive Edge settled into a stalking position outside of pacesetter Hillbilly Royalty, and when asked, the colt responded with a burst of speed that put him 4-1/2 lengths in front at the wire for trainer Todd Pletcher.

Divisidero (Kitten’s Joy – Madame Du Lac, by Lemon Drop Kid) pulled off a thrilling upset in the American Turf Stakes (GII), his first graded stakes win. The bay colt, who is still five days away from his actual third birthday, only had a maiden win and a third-place finish in the Palm Beach Stakes (GIII) coming into this race. In the American Turf, Divisidero was content to hang towards the back of the pack for the 1-1/16 miles of the grass race. With an incredible burst of speed, Divisidero propelled himself past the majority of the field down the stretch, eating up ground while chasing leader A Lot. The colt passed that foe a few strides from the wire to win by three-quarters of a length, and with that victory, expect to see Divisidero tackling many of the other turf races this year.

Champion sprinter Judy the Beauty was taken down in her 2015 debut by the tenacious Dame Dorothy (Bernardini – Vole Vole Monamour, by Woodsman). Out of seven starts, Dame Dorothy has won five times, placed once, and finished third once. Already a graded stakes victor in the 2014 Grade III Turnback the Alarm Stakes, the bay filly owned by Bobby Flay has also turned in good performances in the Comely Stakes (GIII) and Santa Margarita Stakes (GI). At the break of the Humana Distaff Stakes (GI), Dame Dorothy settled a few lengths off the leaders before slowly picking off the horses in front of her. The swift Bernardini filly had a lot to do before the wire in running down Moonlit Stroll and Judy the Beauty, and after a brief nose-and-nose duel with the latter champion, Dame Dorothy thrust her head in front at the wire to get the win.

In the Churchill Distaff Turf Mile Stakes for fillies and mares, Tepin (Bernstein – Life Happened, by Stravinsky) surprised the field with a victory. The bay, four-year-old filly has been working incredibly well up to this race, even out-running Kentucky Derby entrant Danzig Moon in the mornings. The filly has had little racing luck since her 2013 win in the Delta Downs Princess Stakes (GIII), although she did manage to finish second in the 2014 San Clemente Stakes (GIII). At Churchill Downs, however, the filly found her stride. Under Julien Leparoux, Tepin broke smoothly and went straight to the lead where she would remain for the entirety of the race, finishing 1-1/2 lengths ahead of runner-up Coffee Clique.

Breeders’ Cup Classic winner Bayern disappointed in the Churchill Downs Stakes, but blooming expert sprinter and miler Private Zone (Macho Uno – Auburn Beauty, by Siphon) turned in an impressive performance. Wearing the blue and black stripes of Good Friends Stable, the six-year-old gelding has claimed the Vosburgh Stakes (GI) twice and the Cigar Mile Handicap (GI), and he most recently finished in second in the March Gulfstream Park Handicap (GII). In the Churchill Downs Stakes (GII), Private Zone led over the seven furlongs and held off a stretch run by Nates Mineshaft to win by 4-1/4 lengths in the good time of 1:22.54.

In a four-way photo finish, Finnegans Wake (Powerscourt – Boat’s Ghost, Silver Ghost) came out on top. The six-year-old bay son of Powerscourt has taken a while to successfully get to the graded stakes level with his first graded stakes win coming in his third year of racing in the Arlington Handicap (GIII). Since 2014, Finnegans Wake has won the Hollywood Turf Cup Stakes, San Gabriel Stakes, and San Marcos Stakes and finished second in the San Luis Rey Stakes (all GII). Thirteen lengths off the leader at the beginning of the race, Finnegans Wake gradually began to pick off horses before exploding with a run that pushed him to the front just in time to win by a nose over Jack Milton and Seek Again.

A Derby champion has finally been crowned for 2015. American Pharoah (Pioneerof the Nile – Littleprincessemma, by Yankee Gentleman) lived up to the hype in outrunning Dortmund and Firing Line near the wire. The Champion Two-Year-Old Colt prepped in Arkansas, winning the Rebel Stakes (GII) and Arkansas Derby (GI) in runaway fashion. Dortmund and Carpe Diem were hyped as much as American Pharoah prior to the Derby, but he left the rest of the field chasing his short tail by the end of the homestretch. The bay colt laid close to Dortmund and Firing Line as they led the field, and the three made a simultaneous run for the wire with American Pharoah besting Firing Line by a hard-earned length while Dortmund finished in third. 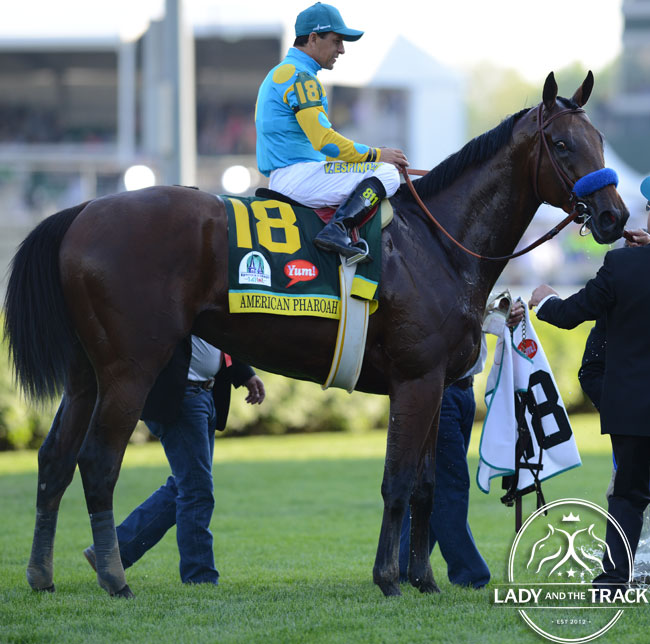 A Derby champion has finally been crowned for 2015. American Pharoah lived up to the hype in outrunning Dortmund and Firing Line near the wire in the 2015 Kentucky Derby. Photo: LymanDVM Photography