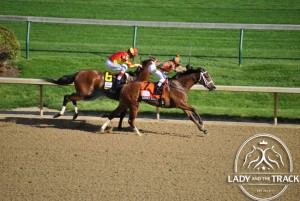 The daughter of Majesticperfection ran well considering the pace scenario, running slightly off the pace set by need-the-lead type Condo Commando and making a rally on the far turn under jockey Kerwin “Boo Boo” Clark. In her last start, she won the GI Ashland at Keeneland after losing to stablemate I’m a Chatterbox at Fair Grounds a few races ago.

Clark was shaken after the win and visibly crying on camera. An NBC reporter talked to him for a short time right after the race about his filly.

“After the Ashland, I just felt like she was really coming around,” Clark said. “When I blew her out the other day, I knew she went quick, but she did it easy.”

Later on as stated in a press release, he also thanked the connections.

“I am very blessed. Blessed to have this horse; to have (trainer) Larry Jones in my life and believing in me, and to have Mr. (Brereton) Jones believe in me and stick with me,” Clark said.

Bettors made California-based filly Stellar Wind the favorite. Although she put in a decent run towards the finish, ultimately she failed to back her supporters and continued trainer John Sadler’s struggles when he ships horses outside California.

But, Angela Renee failed to sustain her rally. Behind them, Shook Up tipped to the outside of them, loomed boldly and hung.

Lovely Maria simply moved better than them and pulled away to victory. Meanwhile, Shook Up held second and I’m a Chatterbox came late for third. Stellar Wind finished fourth. Lovely Maria had worked quickly coming into this race, getting five furlong in 59 3/5 seconds in her last drill, even working faster than her stablemate I’m a Chatterbox who could only go in 1:01.

Jones had expressed concerns days before the race that I’m a Chatterbox did not handle Churchill Downs as well as Fair Grounds. Even before the Kentucky Oaks, when an NBC reporter asked him whether I’m a Chatterbox could transfer her excellent Fair Grounds form to Churchill, his answer seemed to give the impression of one “hoping” for the same form.

“This is the test,” Jones said.

Some horses do not handle different dirt surfaces, despite the fact they all are labeled as dirt. I’m a Chatterbox remains a good filly and should find herself competitive going down the road against the best three-year-olds. Jockey Florent Geroux had no excuses. .

“She broke a step slow and I was maybe a little farther back than I wanted but, other than that, everything went smooth,” Geroux explained.

From watching the NBC pre-race show, one of the analysts mentioned he talked with Stellar Wind’s trainer before the race. He asked Sadler what his main worry was, and his response indicated that he felt the competition in California was not the best. Coming into this race, Sadler only won twice out of 63 tries for the past five years outside California. Perhaps her loss came as a combination of better competition and Sadler’s underperformance in other states.

Early fractions for the race were 23.51 seconds for the opening quarter, 47.26 seconds for the half and 1:11.50 for the six furlong point. The winner ran nine furlongs in 1:50.45. They set a quick pace, likely because the other jockeys knew not to let Condo Commando run uncontested.

When asked what will stand out about the win, Clark responded, “Crossing the wire in front.”

Sarah Sis was pulled up by jockey Gary Stevens. She did not appear in too much distress.

According to the on-call veterinarian when interviewed, he said, “There is no obvious injury to the limbs. The horse just did not feel right to the jockey.”

Stevens revealed more in the same press release, “At the three-sixteenths (pole), she just stuck her feet in the ground. She went from runner to stopper. I had to pull her up. Something got her. But she just walked away OK. I think she’s going to be all right.”

Lovely Maria, owned by Fletcher Gray, paid $14.60 to win, $7.80 to place and $5.40 to show, generous prices for a quality filly trained by an experienced Oaks winner. No doubt, her victory will be a popular one. 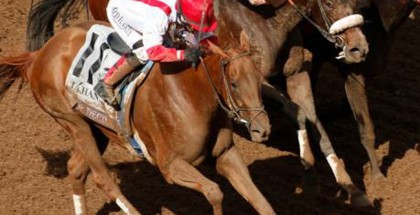 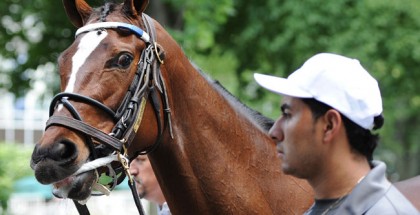