Stevens High On Beholder After Santa Lucia Win: When jockey Gary Stevens praised Beholder’s easy win in the ungraded Santa Lucia at Santa Anita Park and called her “the best filly I’ve ever sat on” and went on to add “I’m not sure she’s not the best horse I’ve ever ridden,” fans had a right to question Stevens. After all, the Hall of Fame rider has ridden numerous champions over the years.

In fairness, Beholder’s comeback win was impressive. The now five-year-old mare came off a layoff that lasted over six months, and trainer Richard Mandella does not normally crank them for their first start back. Enough speed horses lined up to give her a test, including Uzziel and Tiz Midnight, the latter of which gave Beholder a scare in the Grade I Zenyatta last fall. Tiz Midnight ended up bobbling at the start this time which left Uzziel trying for a steal up front and Beholder chasing in second.

Beholder moved of her own will approaching the far turn and passed Uzziel like she did not exist. Kent Desormeaux gave Uzziel some hard pumps and a few hits with the stick, but his mount failed to offer anything more. Despite the margin of just under four lengths, Beholder left no doubt about her dominance over the group. She earned a final time of 1:42.54 and a 105 TimeformUS speed figure.

Figure-maker Craig Milkowski went on to write, “Beholder…ran only as fast as needed to win comfortably.”

Clearly, the fast mare looked good and will build off this win going forward. But, Stevens ranking Beholder above any other filly he rode and questioning whether or not she is the best overall seems like a statement that deserves analysis.

Stevens used to ride the great filly Serena’s Song. In 1995, they teamed up to win the Mother Goose, Haskell, Gazelle, and Beldame, all Grade I victories. In addition, Serena’s Song won the Grade I Las Virgenes, Santa Anita Oaks, and Grade II Jim Beam with a different jockey. What a year! Serena’s Song failed though in three tries at the Breeders’ Cup from 1994-1996, whereas Beholder owns two Breeders’ Cup wins already.

Seven years prior to Serena’s Song’s championship season, Stevens and Winning Colors won the Grade I Santa Anita Oaks, Santa Anita Derby, and Kentucky Derby. Of course, Beholder can only win the races her connections enter, and they opted for the Kentucky Oaks in 2013, an understandable goal.

Talented and accomplished male horses ran under Stevens too, including Mucho Macho Man. Just less than two years ago, they won the Breeders’ Cup Classic together. Yet, Stevens believes Beholder would have given that horse a run for his money.

“I know she would have given them all they could handle in the Classic that year, she’s that good,” Stevens said.

Keep in mind, in 2013 Beholder ran as a three-year-old filly. Around the world, fillies run against males without any controversy, so maybe Stevens is not entirely off-base.

Stevens also won two-thirds of the Triple Crown with Point Given in 2001 and Silver Charm in 1997. Point Given won the Belmont Stakes in devastating fashion by over 12 lengths! If his career had not stopped short later that summer after he won the Haskell and Travers, the sky would have been the limit. As for Silver Charm and his post-Triple Crown career, the gray horse won the Dubai World Cup among many other important dirt races.

Again, horses can only defeat the opponents facing them. Maybe Beholder would win the Breeders’ Cup Classic or other open company races if given a shot. Regardless of where she stands in comparison to other Stevens-ridden stars, Beholder possesses a world of talent. Owner B. Wayne Hughes goes as far as to believe Beholder is “the best filly in the world.” With races such as Santa Anita’s Vanity and the Ogden Phipps at Belmont Park on the radar, she will make her presence known as the year goes on. 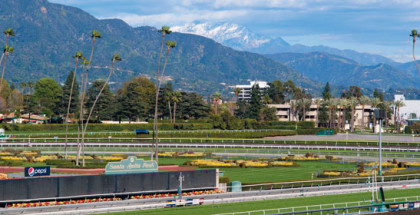 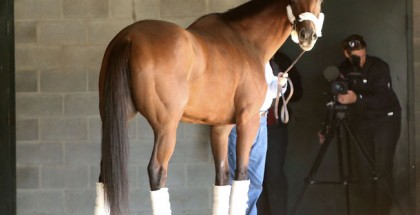 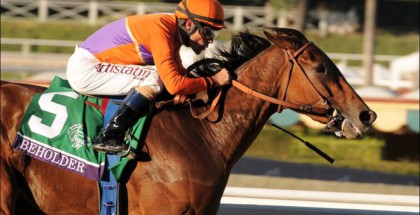 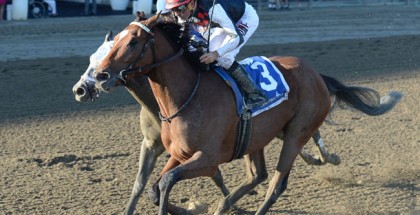