Shared Belief Clear Choice in 2015 Santa Anita Handicap: From a wagering standpoint, bettors might find the Santa Anita Handicap on Saturday a bit unattractive as popular gelding Shared Belief’s competition seems light. After beating Horse of the Year California Chrome on this same racetrack last month in the G2 San Antonio Invitational, no scenario seems plausible for Shared Belief to lose here against lesser horses, save he dumps jockey Mike Smith or something else unforeseen happens. 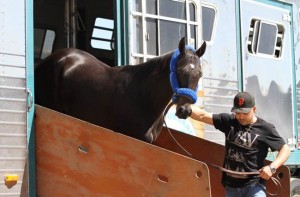 Shared Belief, trained by Jerry Hollendorfer and owned in part by media personality Jim Rome’s Jungle Racing LLC, has compiled a 9 for 10 record and earned over $2 million. The son of Candy Ride won the 2013 Eclipse Award for two-year-old male, but a troubled trip in the Breeders’ Cup Classic prevented Shared Belief from securing any awards last year. This year may end differently.

Besides the impressive San Antonio effort, Shared Belief recently won the G1 Malibu back in December over Conquest Two Step. Conquest Two Step went on to decisively win the Palos Verdes (G2) over the well-known elite sprinter Secret Circle and looks to be headed towards more prestigious races in the sprint division.

Before the Breeders’ Cup, Shared Belief also won the G1 Awesome Again in a stunning performance considering his encountered trouble. Opponent Sky Kingdom’s rider Victor Espinoza used aggressive tactics to take out the favorite by forcing Shared Belief wide on the first turn and accelerating or decelerating on the backside to make sure Shared Belief failed to tuck in. In spite of Sky Kingdom’s insolent tactics, Shared Belief won. Starting from post five, Smith will have options on whether to press the pace or take back.

Of course, taking extremely short odds on any horse is not a good idea. If searching for an alternative, last year’s G1 Whitney winner Moreno makes a surprise appearance for trainer Eric Guillot. Also a gelding and sired by Ghostzapper, he breaks alongside Shared Belief from post six. Moreno’s poor effort in the Breeders’ Cup Classic resulted from both an injury and a failure to make the lead. Two starts ago, he again failed to secure the lead in the G1 Jockey Club Gold Cup and ran into some trouble as well.

Moreno’s good races came when he received a free lead of at least one length by the second call. Will that happen here? Clearing the fast Sr. Quisqueyano early remains one challenge in making it to the front.

Trainer Richard Mandella sends out the Argentinian-bred Catch a Flight. His South American dirt form was unstoppable as the son of Giant’s Causeway won his last five dirt starts in Brazil with authority. But, his North American form only shows a narrow optional claiming win out of two starts at Santa Anita. Although faced with a tough task from the twelve slot, he could improve.

Zenyatta’s former team of trainer John Shirreffs and owners Mr. and Mrs. Moss step up Cool Samurai to the Grade 1 level. If the pace collapses, perhaps the First Samurai gelding will pick up the pieces from the rail for a share of the purse (and who knows – if Shared Belief forgets how to run, the show payoffs could blow up). The lack of any bullet workouts slightly dampens enthusiasm for this horse as Shirreffs typically drills his horses harder when he has a goal of victory in mind.

As for other underneath candidates, every once in a while Imperative throws a good effort, and a fast pace might help him as well. In addition, Bronzo ran fourth in the San Antonio, so another decent closing effort would not surprise anyone.

Bettors should think carefully before using a rockstar-status horse such as Shared Belief in any wager. In every pool, the expected payouts involving this horse are projected to be low. Without taking value into consideration, Shared Belief will likely win by a few lengths. For primarily the second through fourth slots, Moreno, Catch a Flight, Cool Samurai, Imperative, and Bronzo appear to be the best alternative options.