Kentucky Derby Contender Far Right Hopes To Go Far: Far Right has ruled the rail at Oaklawn Park this season, taking both the Smarty Jones Stakes and the Southwest Stakes (GIII) with solid stretch moves on the inside. A three-year-old chestnut colt, Far Right, like many others, has hopeful intentions of making it into the Run for the Roses. 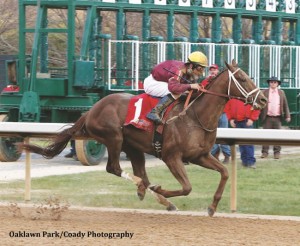 A three-year-old chestnut colt, Far Right, like many others, has hopeful intentions of making it into the Run for the Roses. Photo: Coady Photography, Oaklawn Park

Far Right is among some of the more heavily raced juveniles, having run 6 times with a fair amount of success at age two. Purchased by John Jazdzewski for the low price of $2,500 at Keeneland’s 2013 January Horses of All Ages Sale, he first ran last April in a 5-1/2 furlong maiden special weight over the all-weather track at Keeneland. In that race, the untried juvenile unseated his rider before successfully entering the starting gate and breaking awkwardly to finish a distant second to decent rival Conquest Tsunami. Far Right again finished second in his following start over 4-1/2 furlongs, this time being outrun by Cinco Charlie under the twin spires of Churchill Downs.

The improving colt was then sold to Harry Rosenblum and transferred to the barn of Ron Moquett. Under these new connections, Far Right met success in his third start in a 6-1/2 furlong maiden event, drawing away from the rest of the field to win by five lengths. Encouraged by the colt’s success, he was entered in the Grade II Futurity Stakes at Belmont, this time running a tired fourth over the six-furlong route. Far Right would again be hard-pressed to find victory against Conquest Tsunami, next running a solid third in the one-mile Street Sense Stakes. As his last start as a juvenile, Far Right was entered in the November Delta Downs Jackpot Stakes (GIII) in which he endured a troubled trip. Far Right was outrun early, and upon advancing, he was forced to check and retreat, but he responded well enough to finish an advancing third.

Between the end of his juvenile season and the beginning of his thus far successful three-year-old season, Robert LaPenta bought into part of the colt and now shares ownership with Rosenblum.

Far Right began preparation for a hypothetical start in the Kentucky Derby with a victory in the Smarty Jones Stakes at the Arkansas track of Oaklawn. Off to a slow start, the colt was unhurried by professional handler Mike Smith and was moved to race onto the rail. Coming into contention with the erratically veering Mr. Z and Bayerd, Far Right ran along the inside of those two to nab the victory by 1-3/4 lengths.

Far Right’s second victory at Oaklawn proved to be a bit more challenging. However, a sloppy track and an awkward run in the 1-1/16-mile Southwest Stakes (GIII) did not keep him from victory. Far Right broke in at the start and was bothered on the first turn before moving four-wide to make a run at the leaders. Finding an opening, Mike Smith guided him back to the inside where he powered down the homestretch to claim the win by three-quarters of a length over The Truth Or Else and familiar foe Mr. Z.

To add to his apparent favor of the Arkansas oval, Far Right has consistently been one of the best workers at at Oaklawn at various distances. The colt will remain there in anticipation of running in the Arkansas Derby (GI) as a likely final start before seriously considering the Kentucky Derby.

There are doubts about Far Right’s ability to handle classic distances that stem from his sprinting-oriented pedigree. He is a son of the successful miler Notional who was also an effective runner up to a-mile-and-a-sixteenth in multiple graded stakes races, including the San Rafael Stakes (GII) and the Risen Star Stakes (GIII). Far Right’s immediate female family through his dam Zindi is rather void of impressive runners. The majority of the products of this female line were most successful in dirt sprints or mile races, and the only real source of stamina is from fourth-dam Cascapedia, a multiple graded stakes winner over dirt routes and the 1997 Champion Older Female. Far Right’s damsire Vindication, the 2002 Breeders’ Cup Juvenile winner and Champion Two-Year Old Colt, also adds a bit of stamina into his pedigree. While the sprinting or miler influence certainly stands out the most in his pedigree, Far Right has yet to show any sign of slowing down or any lack of desire to continue running. Here’s to hoping he and connections make it into the starting gate on the first Saturday in May.

Clash of Titans in the 2015 Tampa Bay Derby