Santa Anita Park Saturday Late Pick 4 Selections: Santa Anita Park will not be hosting any Kentucky Derby prep races this week, but it is time for the ladies to shine in the main event of the wide-open Santa Ysabel Stakes (G3), a Kentucky Oaks prep that offers 50 points to the winner and 20,10, and 5 points for the following top finishers. Also highlighted on the card is the return of Luminance, considered to be a very talented filly after nicely winning her debut. This week at Santa Anita Park, we are analyzing the always competitive late Pick 4 for Saturday, February 28, 2015 beginning with race #6 at 2:57 PM PT.

Bob Baffert has entered three good horses in this race, but I’m just using two. Nob Hill is a son of Curlin who is improving with each race. In his last race he finished a strong second behind the promising Cyrus Alexander, giving the impression that he had plenty of gas left in the tank. With Victor Espinoza again in the saddle, this colt will likely roll late. The Man has been the talk of the track since before his debut. A son of the modest stallion Ecclesiastic ($3500 stud fee), he brought a winning bid of $115,000 in the Fasig–Tipton Training Sale of 2014, so this horse should have some quality. The Man has a third and a second-place finish in two starts in sprint races, but now Baffert is stretching him out. Sometimes this kind of move from sprints to routes is very successful, so I’m expecting a superb effort this time.

Although Wild At Heart is moving up in class in attempting this race, she looked very strong in the stretch last time she ran, and it seems that the added distance of this race should not be a problem. The Prat-Mandella combo is doing very well lately, so a nice run from this filly is expected. Luminance is returning after a long layoff, but she really impressed folks when she broke her maiden in a five-furlong race at Del Mar. This filly trained by Bob Baffert should be the favorite, but it is not easy to return from a break at a route distance. Lady Zuzu has not raced since October 9 last year when she broke her maiden in a mile race at Keeneland, looking very good in the process. Lady Zuzu’s only race over the dirt was a disappointing sixth-place finish in the Grade 1 Spinaway Stakes, 31 lengths behind Condo Commando. That race was over a sloppy track, so we can assume that the filly did not like the slop since she’s working very well over the Santa Anita dirt.

Rattataptap is trying two turns for first time, but after watching her last race, the distance should not be an issue. This filly has tactical speed, so if the pace turns hot she will be able to rate. Her only loss was in the Santa Ynez (G2) when she had trouble at the start that eliminated all her chances to win. Light the City improved a lot in the Las Virgenes (G1), just losing by a half-length to Callback after running hard in the stretch. Kent Desormeaux repeats the mount, indicating that everybody was happy with his last ride. Achiever’s Legacy always seems to be in the mix, and this time should not be the exception. This City Zip filly has been recording excellent workouts for this race, and Gary Stevens’s experience in the saddle helps her chances of winning. Danette is still a maiden but has good experience with running in Grade 1 stakes. She lost her last race to Popover, a filly many people hold in high regard. Everyone may have forgotten about Danette’s good last run, so she’ll likely go off at huge odds. Rainha Da Bateria is trying the dirt for first time, but her pedigree suggests she should be able to handle it. Always considered to be a very talented filly, “Rainha” certainly deserves a shot in this field.

Sweet Sense is returning from a long layoff, but she’s literally flying in the mornings and is facing a very weak field here. The drop in class is suspicious, but if she runs like she works, there’s not even going to be a race. In addition, her trainer has a high winning percentage when he drops his horses in class. I’m using this mare as a single. 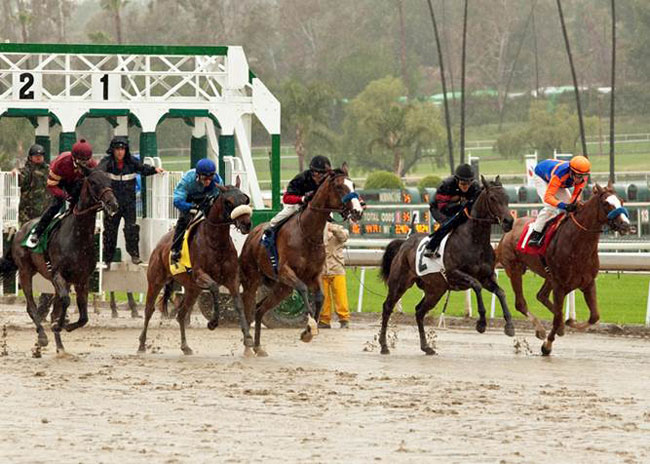 This week at Santa Anita Park, we are analyzing the always competitive late Pick 4 for Saturday, February 28, 2015 beginning with race #6 at 2:57 PM PT. Photo: Benoit 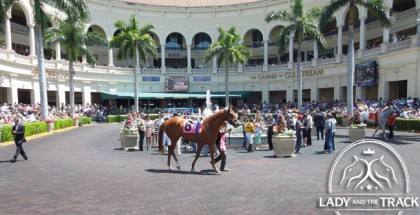 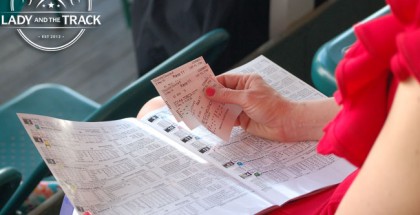