Santa Ysabel Stakes 2015 Picks; Nine Fillies Ready To Fire: Inaugurated in 1968, The Santa Ysabel Stakes is run annually at Santa Anita Park in Arcadia, California. The race is open to three-year-old fillies willing to travel 1-1/16 miles on the dirt, often for the first time in their lives, for a jackpot of $100,000. This race is often used as a prep for the female version of the Triple Crown that consists of the Kentucky Oaks, the Black-Eyed Susan Stakes, and the Mother Goose Stakes. 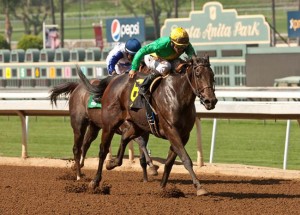 Bob Baffert has won this race a grand total of five times, including the last two renditions. Last year he teamed up with Kaleem Shah and Mike Smith to win with Awesome Baby in a time of 1:42.89. In 2013, Baffert won it for Mike Pegram/Watson/Weitman with Fiftyshadesofhay and Bejarano in the saddle in a time of 1:41.58. The “Coach” D. Wayne Lukas owns the race’s speed record with his filly Sharp Cat who won it in 1997 in 1:41.34.

There looks to be some speed signed up in this race, so I’m going with a couple of bonafide closers and one speedy filly. After six tries on the turf, Rainha Da Bateria, a daughter of Broken Vow, appears here for the Motion barn to try dirt for the first time. Last racing on New Year’s Day, she was a troubled third at this track at 1-1/16 miles in the Blue Northern Stakes. However, she has a grade 3 stakes win at this distance at Keeneland over the turf. She can route, and here’s to hoping she digs the dirt. She carries the highweight in this race with 121 pounds, and I like the turf-to-dirt angle. Mike Smith jumps off her to ride Curlin’s Fox, but I have faith that Tiago Pereira will be able to get her across the finish line first from post position 5.

Hollendorfer sends in three fillies, and they all seem to have the ability to win. I’ll stick with closer Achiever’s Legacy, who comes out of the Las Virgenes (G1) running third behind the winner Callback and stablemate Light the City, whom she again faces here. This City Zip filly won at first asking at Gulfstream and was privately purchased last June. She looks to benefit from a faster pace in this race with the presented early speed. Three starts ago she won at Del Mar on the now-defunct polytrack going seven furlongs and beating Light the City, who finished third. In the Grade 1 Starlet Stakes at Los Alamitos, she earned her highest speed figure after running fifth behind Take Charge Brandi, Feathered, and Maybellene. She has a nice recent five furlong work, and Gary Stevens gets the call. She’ll be ready.

I always like to leave a little speed if playing exacta boxes or trifectas, so I’ll go with Baffert’s Tale of the Cat kid Enchanting Lady who’ll be firing from off the bench after an eight-month layoff. She exits post 3 with Martin Garcia in the irons, who has been pretty hot this meet in the stakes races. She boasts a tough jockey/trainer combo, and Baffert has a 27% trainer rating in regards to running horses at 90+ days away from their most recent starts. She’ll have to deal with a few others up front and will be trying two turns for the first time. In the June 2014 Landaluce Stakes, she beat Seduire by 5-1/4 lengths. To put her victory in perspective, Seduire recently won the Grade 2 Santa Ynez Stakes on January 3 on this track beating Callback, Light the City, and Rattataptap. Here’s to hoping Enchanting Lady fires fresh and routes.

Personally, this looks like a wide-open race that will be very tough to handicap. It will be interesting to see who can rate and who will be sent up front. If I could afford to play ALL in a multi-race wager, I would. I will most likely play a daily double and a pick 3 using this race and three choices (#3,4,5) for one of the legs. If any of these three options have decent post-time odds, I’ll play a small ladder on one of them. I mean, you never know who can win; you can handicap it all day long, but come on folks, isn’t that why it’s called gambling?

I’ll be posting my plays the day of the race. May the horse for the course win and they all run safe Saturday.