Holy Bull Stakes Grade II – One and One Sixteenth Miles
Race #9: 8,6,7 (4:34 PM ET)
Upstart ran a great race in the Breeders’ Cup Juvenile even though he started from the worst possible post position and was still able to finish third. It’s true, Texas Red could not lose to anyone that day, but Upstart’s effort was better than what appeared on paper. The 2015 Holy Bull Stakes field is weaker and Upstart will try to earn early points to run in the Kentucky Derby. Richard Violette, Jr. had Samraat in last year’s Derby and now is trying to reach the run for the roses with Upstart. First Down won a nice race in his debut beating Frosted, who is also entered in this race. In the Nashua G2 he finished fourth in a decent effort, since he faced runners with more experience. He is running with lasix for first time and that may help to improve his race. Looking for good value, I’m using a horse that never fades and runs evenly in the stretch, this horse is Frammento. Ok, he was beaten by Bluegrass Singer by 4 ¾ lengths, but this time the race is totally different. The added distance and some pressure on the lead may hurt Bluegrass Singer, and surely will benefit the grinder Frammento. 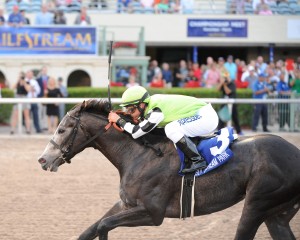 The added distance and some pressure on the lead may hurt Bluegrass Singer, and surely will benefit the grinder Frammento in the Holy Bull Stakes at Gulfstream Park on Saturday, January 24, 2015.
Photo: Natalie Fawkes, Coglianese Photos, Inc.

Forward Gal Stakes Grade II – Seven Furlongs
Race #10: 3,5,10 (5:06 PM ET)
Taylor S looked like a serious filly when she won very easily an 75K Allowance Optional Claiming at Churchill Downs. She’s working very well at Gulfstream Park and despite the fact that she’s moving up in class, she has the potential to beat this field. Taylor S, a ½ sister to the prospect Liam’s Map, has the pedigree to give her best at seven furlongs. Seduire is the speed of the speed in this race and has experience in graded stakes races. My only question is, can she reproduce her performance at Gulfstream Park? If she does she will be very tough to catch. I’m giving another chance to By the Moon. This filly is the class of the field and looks strong. She’s returning from a flop in the Breeders’ Cup Juvenile Fillies but an improvement at this level is expected. Jose Ortiz stays in the saddle and that’s a sign of confidence.

California Cup Derby – One and One Sixteenth Miles
Race #6: 2,7,5 (2:30 PM PT)
The California Cup Derby produced last year’s Kentucky Derby winner California Chrome. This race is restricted for Cal breds. It’s likely the winner of this race will face open company in the San Felipe Stakes, looking for Derby points. The unbeaten Acceptance should be the heavy favorite in this spot but these horses are improving day by day, and it is not clear who’s the better horse. However, Acceptance has shown the ability to run elsewhere and that’s a good sign. Pulmarack challenged the unbeaten in Los Alamitos, but can’t beat Acceptance. Now at Santa Anita, things can easily turn around. Pulmarack’s dam, Tamarack Bay, has produced pretty good runners like Tamarando, Luckarack and U’narack, so the potential is there. Kluszewski is an interesting horse, if you watch the replay of his last race, he took the lead, then went back and when everybody thought he would finish last, he closed to finish second just a half length behind Pulmarack. Kluszewski has some Chilean and Argentinean influence in the dam side, so the distance is not a concern.

California Cup Turf Classic Stakes – One and One Eighth Miles
Race #9: 5,3,7 (4:00 PM PT)
Big Bane Theory had a nightmare trip in his January 3, 2015 race at Santa Anita Park, with no room to run in the stretch. Now with a clean trip he should be tough to beat, but this is a big field, so nobody can ensure a clean trip. Alert Bay is a horse that can run everywhere, since he has won races on the dirt, turf and tapeta. He has beat great horses like Tonito M and Home Run Kitten in open company. This field looks easier for him and surely he’ll be in the mix. If the pace collapses, Awesome Return can take advantage and win the race. He ran wide in his last and probably gifted the race due to losing ground.