Del Mar Plays for Saturday, November 29, 2014: Well, hopefully all of the tryptophan and black Friday shopping has worn off from the Thanksgiving weekend and everyone is back in form and ready to play some races at balmy Del Mar. This is closing weekend of the meet and there looks to be some mighty fine races and wagering on tap so let’s get started with a look at last weekend. 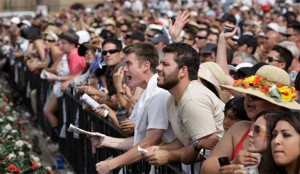 Sigi and I always seem to nail these but don’t combine our picks enough in the right plays. Always seems to roll that way in this game though.
A beginner’s lesson: Always box your top 2-3 picks in a race if it looks like a wide-open race, large field, the favorite looks weak and just about anyone can win. Or put money on one of them to win/place/show. You should cash!

Race #3: Native Diver Stakes (GIII): 1 1/8 all-weather: 1,3 (7)
So I’m going with Big Cazanova or “Big Love” who both Sigi and I have been following for quite a while. He has two craycray wins over the poly this past summer at Ole Del Mar, where he also owns a pair of track records including the one at 1 1/8 miles. He tired in the Las Vegas Marathon going 1 3/4 and I’m not sure WHAT Nakatani was doing with the outrageous speed run out front. He also faded in the Jockey Club Gold Cup run on the dirt even though he has run well on it before. Gets Elvis Trujillo up, the cutback in distance he should relish and has a nice recent work. Bring it Big C. Blue Tone looks good coming back to the poly as he has a few wins over it this past summer. The son of Birdstone gets the hot jockey/trainer combo Desormeaux/Hess. Last out on the dirt he was fourth to Regally Ready on the Santa Anita dirt. He needs to be on his best game to defeat Big Love.

Race #6: Jimmy Durante Stakes (GIII) One Mile Turf for 2 year-old fillies: 7,2,5 (4)
Bobbi Grace can bring it in my opine after finishing 3rd to Her Emmynency last out 10/5 at Santa Anita in the Surfer Girl Stakes on the turf at one mile where she was 5 wide in to the stretch and bested the rest. This will be her second outing after finishing first across the pond in Ireland going 6f on the grass. Motion is hot this meet and sends in Rainha Da Bateria who has the best speed figure at this disance after finishing 9th in the Breeders’ Cup Juvenile Fillies Turf on 10/31 behind Lady Eli and the others where she was 6 wide and didn’t seem to rally. She is the only stakes winner in this group. She won the (GIIIT) at Keeneland going 1 1/16 October 8th . She’ll be ready to romp with her come-from-behind style and a nice ride form Mike Smith. Backstreet Lisa with the Miller/Maldonado connections interest me as well as she’s a City Zip baby. Last out she won at Santa Anita gate to wire going a mile on the turf. Hope she improves in her second grass start at decent odds to it the board.

Race #8: Hollywood Derby (GI): 1 1/8 on the turf: 5,2
California Chrome doesn’t need much of an introduction. This his a huge chance they are taking with this colt and I think it’s a good one. He was so game-on in the Breeders’ Cup Classic after running wide the entire race and missing Bayern by a neck for 3rd. I like his outside post and there doesn’t seem to be much speed in here so he should be able to stalk or go to the lead. He can carry his speed, so watch out. I am also really like the Queen’s Plate winner Lexie Lou from the Casse barn who is proven over the turf as she has two victories over the surface. This is her first start at Del Mar after exiting a 1 1/4 length romp in the one-mile Autumn Miss Stakes (GIIIT) 10/25 at Santa Anita. Nakatani is up again and she should be ready to fire.

Race #3: Native Diver Stakes (GIII): 1 1/8 all-weather: 1
The Argentinean bred Big Cazanova, returns after a weird race in the Las Vegas Marathon, where he was forced to set flashy fractions; to run wide and pass the 6 Furlongs in 1:10.1 in a 1 ¾ m race it’s crazy. In my opinion, Nakatani thought he was running in the BC Classic instead the Marathon. Well, that’s the past, now thinking in the present, I see very good workouts after that effort, and that’s a positive sign. I expect a handily win this time, so I’m singling him. Also expect a great 2015 season for this guy.

Race #6: Jimmy Durante Stakes (GIII) One Mile Turf for 2 year-old fillies: 9,2,7
Jaded Glory looked like a train without brakes in her debut, and all indicate she’s a promising filly. According to her pedigree, she’ll appreciate the distance; although she’s moving up in class, she’s my top pick. Rainha Da Bateria is the class of the field, after a flop in in the the Breeder’s Cup Juvenile Turf, she returns to her level, Grade 3 races. Let’s see if she picks up confidence and shows all her potential. Bobbi Grace is an Irish lady, and that’s enough to respect her. She did a great race in her debut, and it seems her connections takes the necessarily time to come back.

Race #8: Hollywood Derby (GI): 1 1/8 on the turf: 5
Since the Kentucky Derby I was one of the guys that always tried to beat California Chrome, and believe me, I was only looking for value, but this time I’m not trying to beat him. I know this is his first race in the turf, but this is a short field and he’s going to run really comfortably in the lead. I’m definitely singling California Chrome. 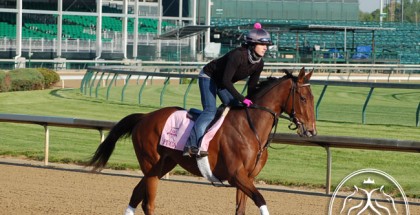 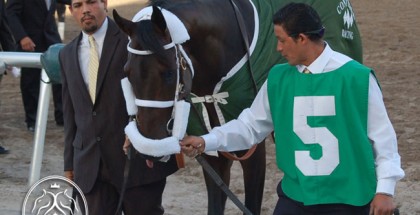 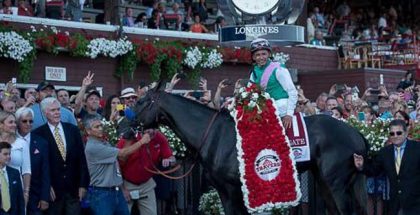