Undefeated Fillies Face Off in Frizette: The excitement surrounds two-year-old fillies this weekend down the 2015 Kentucky Oaks Trail in the G1 $500,000 Frizette Stakes on Saturday, October 4, 2014 at Belmont Park in Elmont, New York. The 2014 Frizette Stakes will not only award it’s top four finishers points towards a possible spot in the Kentucky Oaks starting gate, but will award it’s first place finisher an automatic entry in the 2014 Breeders’ Cup Juvenile Fillies that takes place on Saturday, November 1, 2014 at Santa Anita Park. (See Frizette Posts & Odds Below) 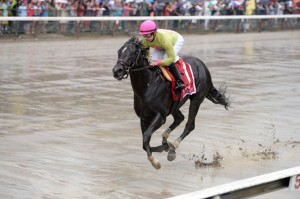 Condo Commando, pictured above winning in the Saratoga slop, is the morning line favorite for the “Win and You’re In” Frizette Stakes at Belmont Park on Saturday, October 4, 2014.
Photo: Coglianese/NYRA

Condo Commando is the 2-1 morning line favorite in the 2014 Frizette and will team up with regular rider jockey Joe Bravo for the “Win and You’re In” one-mile race. The filly is currently undefeated; last out winning the G1 Spinaway Stakes at Saratoga by a whopping 13 ¼ lengths in the pouring rain. With 80% chance of rain in the forecast for Saturday in Elmont, Condo Commando may find herself in the slop once again, which she handles nicely.

Condo Commando sure is a lucky little lady for trainer Rudy Rodriguez and owner Michael Dubb. The filly could have been claimed for a measly $75k after her debut but there were no takers.

Another undefeated filly will give Condo Commando a run for her money in the 2014 Frizette. Cavorting, with 5-2 morning line odds, is also 2-2 in her two-year-old year. She first won her maiden at Belmont Park by leading the pack from gate to wire then went on to Saratoga taking the G2 Adirondack Stakes by 1 ¾ lengths.

Cavorting is trained by Kiaran McLaughlin who may face the most recent “Win and You’re In” filly Angela Renee in November if he wins the 2014 Frizette Stakes. McLaughlin reported, “Angela Renee’s win certainly flatters our form. Angela Renee is by Bernardini and so is Cavorting; he’s having a great year. Cavorting has been working very well, and all systems are go. She’s a lovely filly.”

The Frizette Stakes is the 6th race of the day at Belmont Park on Saturday, October 4, 2014 with a post time of 3:25 PM ET. The G1 Champagne Stakes for two-year-old colts on the Kentucky Derby Trail headline the great day of racing at 4:29 PM ET. 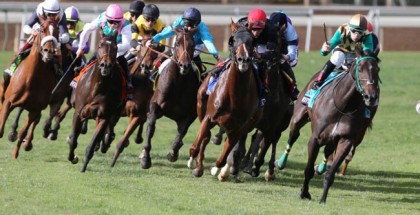 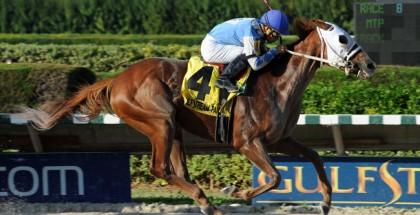