Get to Know the 2014 Travers Winner V.E. Day: V.E. Day is our newest grades stakes winner! Winning the Travers (G1) on Saturday, August 23, 2014 in upsetting fashion, he stole the victory from his stable mate, Wicked Strong. I am positive his trainer would not have entered him had he thought he did not have a chance, but I doubt the trainer believed he would finish 1-2. Since V.E. Day is a shining star this weekend, let’s get to know him! 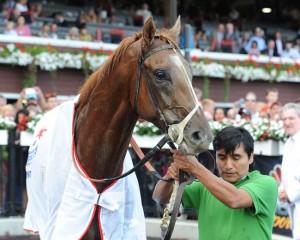 The coolest thing about V.E. Day’s pedigree is that he is bred on the exact same cross as Curlin and Blueskiesandrainbows.
Photo: Coglianese/NYRA

The English Channel colt is obviously coming into his own, and he starting to stamp himself as a threat against others of his crop. The coolest thing about V.E. Day’s pedigree is that he is bred on the exact same cross as Curlin and Blueskiesandrainbows. We see distance and stamina prominent in all three of these horses, and even in English Channel, a long-winded turf horse. English Channel himself has a very long career, compared to some of the successful ones of his generation. He raced until he was five, which is not very common of top quality colts. Will we see V.E. Day race for more than his three-year-old season? Let’s hope so, because he is only getting better with age!

V.E. Day is proving he belongs at the top level, as his race record has shown. Lightly raced, V.E. Day sports a 6-4(1)-1-0 race record. Only out of the money once, which came in his debut (which was on the turf), V.E. Day entered the Travers on a three race win streak, and exited on a four race win streak. Another stat about the colt, he is never been shorter than a mile. The colt relishes any ground and any surface he can get! The colt is very diverse, and likely to show on a grand stage anywhere!

V.E. Day’s connections are not native to America, but of France. Owner Magalen O. Bryant won the 2013 Lonesome Glory handicap in 2013 with Gustavian, but not many other horses stand out. Bryant did, however, bred the 1994 champion two-year-old of France, a colt named Pennekamp. Owned my Sheikh Mohammad, the colt failed to produce flat runners, but was a star of a sire of National Hunt horses. The connects of V.E. Day are more prominent overseas, but V.E. Day could stamp their names here in the United States.

V.E. Day has a very prominent trainer. Jimmy Jerkens learned all he knows from his father, Allen “the Giant Killer” Jerkens. Jimmy Jerkens has had a prominent career of his own, as he stamped his name multiple names passing through his stable that we would likely all recognize; Artie Schiller, Corinthian, Afleet Express, and Quality Road. Jimmy Jerkens, just this year, has top colt Wicked Strong, and with only 79 starts this year (for the trainer), he has a winning percentage of 31.6%. What an awesome percentage! Jerkens is a good trainer who is very confident in his horses, especially when he puts them in graded stakes wins.

In short, V.E. Day is maturing, growing, and only getting better with every passing day. If he can stay sound, and continue to prove he belongs with the best horses of his crop, you will likely see him on a grander stage more and more. 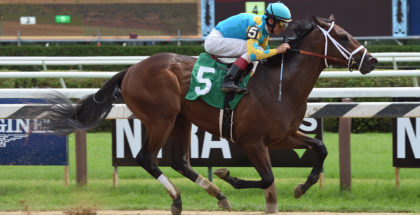 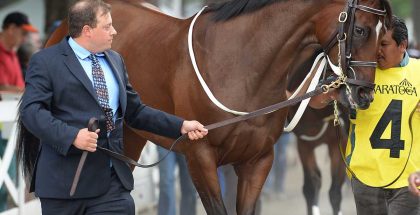 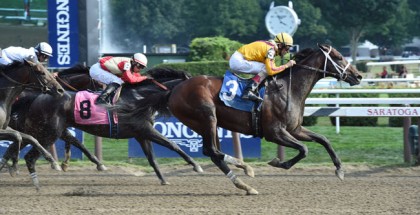 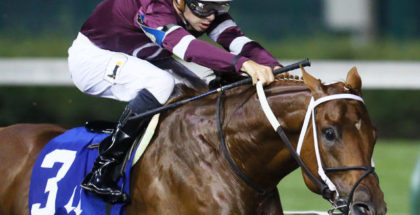