Recapping the Standouts of the New York Yearling Sale

Recapping the Standouts of the New York Yearling Sale: Normally, the Saratoga Select Yearling sale is the place to go to buy the best of the best when it comes to yearlings. I watched the New York Bred Preferred Yearling sale on August 9-10 and all I can say is that I would rather buy a well-bred New York bred yearling because I saw some serious quality for bargain prices. Now, I know Kentucky is said to be the cream of the crop, but who says one of these yearlings isn’t the next Kentucky Derby winner? I saw some yearlings that I really liked, pedigree was their first impression and their looks were their second impression. 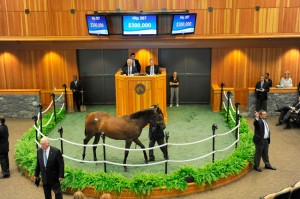 Hip 467, a Tale of Ekati colt was not on my initial list, even though Tale of Ekati has a special place in my heart. This dark bay colt was very impressive in his looks and the way he handled himself in the sales ring. He had a very good gait as he walked into the ring. He displayed great muscle, nice shoulder, a nice, straight back, and he was quite tall and leggy. The colt is from the female family of Carson Hollow, a grade one winning female. The colt was sold for $180,000 and was bought by Sackatoga Stable, whom is best known for the success of Funny Cide.

Hip 310, a bay filly for young sire Tizway, out of a Crafty Friend mare. The filly was the most balanced horse I have personally ever seen. Had a great, big walk, which covered some ground. The filly was very well muscled, had good bone, and was very evenly built. She was alert and curious, but not bossy and nervous. She was sold for a price of $250,000 by Huber Guy.

Hip 436, a Lookin at Lucky filly out of Rose Rhapsody. This filly is from the same female family as Zazu and Flashback. The filly wasn’t a star on my list, but buyers saw differently. The filly had nothing I could pick apart, but she wasn’t a wow to me as some of my other picks. She did, however, have good bone, well developed muscle, and a very pretty neck and head. Her walk was also very nice, but she was on the smaller side still, so she didn’t cover the ground like some of the other yearlings. The filly was alert, but very professional and calm. The chestnut filly sold for a sales topping price of $270,000 to Whisper Hill Farm.

Hip 207, a big bay filly, by freshman sire Uncle Mo, out of Vroom Hilda. This bay filly resembled her sire. She was leggy and tall, but had well developed muscle with good bone and athletic build. She has a nice head, and was very well built, despite needing to grow into her frame a bit more. She was moving the sales ring a lot, but not seeming too nervous. The filly walked out of the sales ring for $115,000, but was marked not sold in the results, meaning she was bought back by her sellers.

Hip 334, a chestnut filly by Haynesfield, out of Horticulture, this filly made my jaw drop when she walked into the ring. She was a beautifully built horse. She had a great build, good bone, with nicely developed muscle. She was quite leggy, but he legs were very well built, as well. She was athletic with a fantastic shoulder. This filly was also very tall. For the first crop of Haynesfield, I was quite impressed with this filly. She was bought $90,000 by Matthew Schera, which could prove to be a steal down the road.

Hip 317, a dark brown or bay colt by Scat Daddy out of Gospel, made my jaw drop, not because of his plain brown coat, not because of the nonexistent white on him, but because of his massive size. He reminded me off Mucho Macho Man, because this colt was so massive. His head was blocky and proportionate to his body. He was very well muscled for how big he was, and his bone and legs were very nice. I see this colt making a very nice turf horse, due to his size and pedigree. The colt left the ring for only $47,000, but was listed as not sold, meaning he was a buy back.

Hip 269, a grey or roan colt by freshman sire Paddy O’Prado, this colt did not disappoint me. My friend actually pointed this one out, because his pedigree didn’t immediately register in my brain, but a look back made me very interested in this colt. Out of an Alysheba mare, this is a such an interesting pedigree. The colt walked in with a very athletic build, good muscle, good bone, and good build. He was a very impressive colt. Sold for $135,000, the colt left buyer Denlea Park.

Kitten’s Joy not a One Hit Wonder Sire 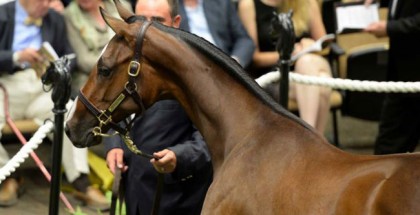