The Breeders’ Cup, one of Thoroughbred racing’s most prestigious international events, has today announced the sites of the next three Breeders’ Cup World Championships – which represents a key element of the company’s long-term strategy to elevate the Breeders’ Cup stature as a preeminent luxury sports and entertainment event. 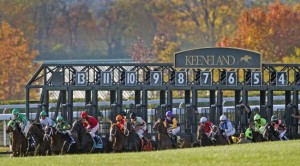 In a recent press release, Keeneland is the confirmed destination for the 2015 Breeders’ Cup.

The multi-year host site decision is part of a forward-thinking growth strategy to showcase the best of what Thoroughbred racing has to offer and is an extension of the brand’s “The Best Is Yet To Come” campaign which promises a curated Thoroughbred racing experience that will attract the best horses, the best owners and the best marketing partners.

“In solidifying the Breeders’ Cup World Championships as a leading global event in Thoroughbred racing, we are very pleased to align ourselves with three of the world’s premier racetracks in Keeneland, Santa Anita and Del Mar,” said Craig Fravel, Breeders’ Cup President and CEO. “The outstanding reputations and historic achievements of each of these venues, coupled with our enhanced platform of marketing and experiential initiatives, provide us with an excellent opportunity to grow our audience by combining the best that horse racing and entertainment have to offer.”

“The Breeders’ Cup at Keeneland is a homecoming for many of these great champions who were foaled and raised at Central Kentucky farms, and often sold at Keeneland,” said Keeneland president and CEO Bill Thomason. “The Keeneland team feels that sense of connection and history with the Breeders’ Cup, and we look forward to offering fans an extraordinary racing and entertainment experience.”

“We are excited and grateful to host the 2016 Breeders’ Cup World Championships,” said Tom Ludt, president of Santa Anita Park. “Santa Anita Park offers horsemen, local fans and our many out-of-town guests the opportunity to experience the best that the sport has to offer, from racing to dining and hospitality. We look forward to working with the Breeders’ Cup to put on a very successful event both this year and again in 2016.”

Del Mar, situated just off the Pacific Ocean, annually hosts one of America’s most popular race meetings from mid-July through early September, and is one of the nation’s leaders in daily attendance and wagering.

“We’ve had many wonderful racing events and thousands of special racing people be part of our rich history at Del Mar,” said Del Mar Thoroughbred Club president and CEO Joe Harper. “But bringing the Breeders’ Cup horses, horsemen and their worldwide fans to our seaside showplace in 2017 just might be our show of shows.”

As a part of its overall strategy to promote the path to the World Championships, Breeders’ Cup has recently announced new marketing initiatives, including a multi-media partnership with NBC, which is comprised of eleven national broadcasts showcasing 18 Breeders’ Cup Challenge Series: Win & You’re In qualifying races. This platform expands the brand’s presence throughout the racing season and also includes increased engagement with the network’s lifestyle personalities. The Breeders’ Cup has also initiated media partnerships with Time, Inc. properties Sports Illustrated and People; and reinforced its Celebrity Ambassador program, which is the first time a horse racing brand has partnered with top celebrities to bring attention to the sport across various multi-media channels.

For more than 75 years, the Keeneland Association has devoted itself to the health and vibrancy of the Thoroughbred industry. As the world’s largest Thoroughbred auction company, Keeneland conducts sales every January, April, September and November. Its sales graduates dominate racing across the globe at every level. In April and October, Keeneland offers some of the highest caliber and richest Thoroughbred racing in the world. Uniquely structured, Keeneland is a private, for-profit corporation that returns its earnings back to the industry and the community in the form of higher purses, as well as millions of dollars in charitable contributions for education, research and health and human services throughout Central Kentucky. To learn more about Keeneland, visit us online at www.keeneland.com.

Santa Anita Park is a Stronach Group company, North America’s leading Thoroughbred racetrack owner/operator. The Stronach Group racetracks include Santa Anita Park, Gulfstream Park & Casino, Golden Gate Fields, Portland Meadows, Laurel Park and Pimlico Race Course, home of the world-famous Preakness. The company owns and operates the Palm Meadows Training Center in Florida, and is one of North America’s top race horse breeders through its award-winning Adena Springs operation. The Stronach Group is one of the world’s largest suppliers of pari-mutuel wagering systems, technologies and services. Its companies include AmTote, a global leader in wagering technology; Xpressbet, an Internet and telephone account wagering service; and Monarch Content Management, which acts as a simulcast purchase and sales agent of horseracing content for numerous North American racetracks and wagering outlets.The Stronach Group is also a major producer of televised horseracing programming through its HRTV cable and satellite network and is North America’s premier supplier of virtual online horseracing games, as well as a leading producer of social media content for the horseracing industry.

Del Mar, just a few furlongs from the Pacific Ocean, has been a racing holiday location since its founding in 1937 by Hollywood pals Bing Crosby and Pat O’Brien. Owner-breeder Crosby, known as the original laid-back Californian, put his special stamp on the place “where nobody’s in a hurry but the horses.” Bing penned and sang a ditty called “Where the Turf Meets the Surf” in 1938 and the song is still played today at the start and finish of every card. That same year the track itself became famous when it hosted a match race between champion Seabiscuit and South American star Ligaroti, broadcast live on Crosby’s highly popular radio show coast to coast. Johnny Longden set the world’s record for most wins by a rider on Labor Day in 1956, a mark broken on Labor Day 1970 at Del Mar by Bill Shoemaker. The seaside oval has evolved from a “quaint country track” to one of America’s racing stalwarts, a proving grounds for stars-in-the-making and stars-in-fact guided by first-rate horsemen and enjoyed by enthusiastic racing crowds all summer long. This fall Del Mar will conduct a second racing season during the month of November. 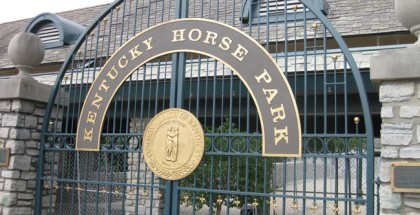 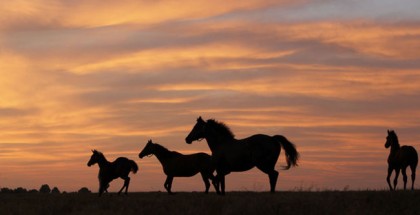 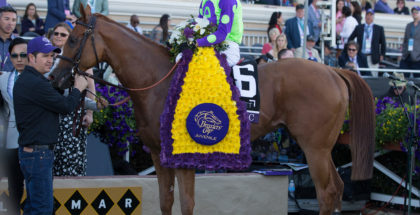 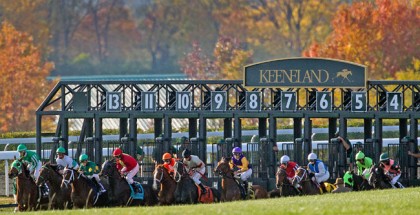