Brazilian Idol Bal A Bali “Wins and Is In” The Breeders’ Cup Turf by Sigi Mendoza: The Brazilian triple crowned Bal A Bali, won the Gran Premio de Brasil (G1) Sunday, June 8th, 2014. The Gran Premio de Brasil is one of the more important races of the nation and takes the direct passage to a spot in the gate for the 2014 Breeders’ Cup Championships for the Turf race, to be run on Saturday, November 1, 2014. 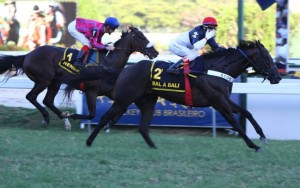 Bal A Bali returned a month ago, short in workouts, and won by a nose. However, this time he demonstrated what is he made of, and won convincingly.

From the beginning of the race, the Argentinian Catch a Flight and the outsider Americando, set a hot pace and at one point, the leaders took advantage of 20-lengths. However, Bal A Bali’s jockey, did not despair and placed him in fourth position, waiting the right moment to attack. After a sterile fight, the leaders faded in the stretch and Bal A Bali passed them easily to win by 2 ½ lengths. Mojito rolled late for second, Beach Ball third, and Ferragamo fourth. The people at the racetrack were pretty excited with this victory, and now Bal a Bali has become an idol in his native Brazil.

Bal A Bali won everything in Brazil, and now his connections can set a more ambitious goal, the Breeders’ Cup Turf. Good news, we’re going to hear the Samba rhythms on November 2014 in Santa Anita!

Sigi Mendoza lives in Barquisimeto, Venezuela and is a regular guest handicapper and contributor specializing in South American horses for Lady and The Track.

Kentucky Derby 2015; Five Steps to Get You There 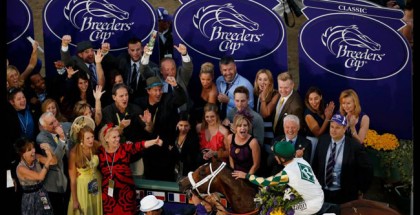