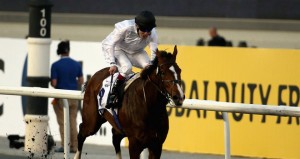 Toast of New York wins the UAE Derby and earns 100 points on the 2014 Kentucky Derby Trail.

It was a good win for both Jamies. Spencer said, “I am not at all surprised [at winning], as this horse has been doing good things all along. He was in control and very responsive to me. This is a high-class horse and whatever he will do now will be impressive anyway.”

Trainer Osborne said of the 2014 UAE Derby, “Listen, he’s a very good horse when he’s sitting there with a lot of ordinary horses. You don’t quite believe what this horse has done and you are wondering whether or not he is just better than the rest and a little bit better or a lot better, but he’s had great preparation through the winter.”