A Happy Holiday Weekend for Mr. Speaker and River Seven at the 2013 Dania Beach Stakes and Harlan’s Holiday Stakes 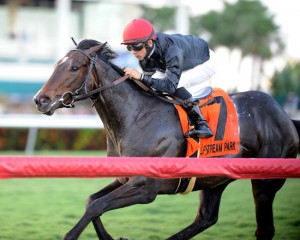 This was a busy race weekend. First, Mr. Speaker took home the $100,000 purse at the grade 3 Dania Beach Stakes on Saturday December 21st at Gulfstream Park. This is the first graded victory after an October 14th maiden win at Belmont Park for Mr. Speaker and the win was a 10-1 surprise. Mr. Speaker took the win by powering through a gap and accelerated ahead for a big win by 2 ¾ lengths. Mr. Speaker completed the firm course distance in 1:36.60.

Mr. Speaker, a Pulpit colt, is trained by Shug McGaughey. McGaughey said of Mr. Speaker and Saturday’s race “He showed me a lot of class down the stretch…It didn’t bother me that he wasn’t on the lead today.”

Mr. Speaker’s jockey Jose Lezcano, “rode him really good, getting him into position on the backside,” McGaughey said.

Rounding out the top three in the race for 2 year olds, were Cabo Cat in 2nd place and Pleuven in 3rd. 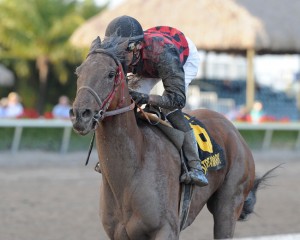 Joe Rocco Jr. served as River Seven’s jockey for the 1 1/16 mile race, and he said of River Seven, “He was going so good that when I asked him to step on it he really accelerated.”

Csaba came in second, and Bourbon Courage, the 7-5 favorite came in third to round out the top three.