Shortly after I’ll Have Another dominated the 2012 Kentucky Derby, the dead body of a Churchill Downs groomer was found. 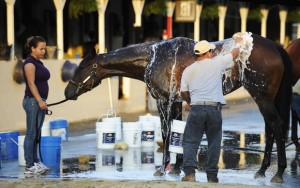 Police searching for suspects after body was found at Churchill Downs just one day after the 2012 Kentucky Derby.

Adan Fabian Perez was a 48-year-old groomer that resided in the dorms on Churchill Downs property. His body was discovered near the winner’s circle shortly after midnight yesterday by a co-worker.

Police are stating that the cause of death of Adan Fabian Perez was unnatural and likely a homicide. They are desperately searching for clues and reviewing video shot at the 2012 Kentucky Derby for any information that may help capture a suspect. Police have no suspects at this time. Homicide investigators arrived at the scene and quickly determined that foul play was involved.

Groomer Adan Fabian Perez was also a father and a brother. Witnesses say the police questioned Perez’s son but no action has been taken in the arrest of any suspects. An autopsy is scheduled on Monday.

Kentucky Derby 2012 Winner I’ll Have Another