Sheer Drama (Burning Roma – Riveting Drama, by Notebook) picked up her second graded stakes win with an impressive performance in the Grade I Delaware Handicap. The five-year-old chestnut mare won the Royal Delta (GII) back in March, and she has since played runner-up in both the La Troienne Stakes (GI) and Fleur de Lis Handicap (GII) thanks to some solid efforts. The hard-knocking mare was the second favorite behind Rosalind in the Delaware Handicap (GI), but it was Sheer Drama who came out on top. Settling in second behind pacemaker Frivolous, the winner of the Fleur de Lis, Sheer Drama hooked up with that familiar rival around the turn and willingly went on to become the two-length victor of the Delaware Handicap, her first Grade I conquest.

Gabriel Charles (Street Hero – Star of Atticus, by Atticus) proved his preference for the Del Mar turf track with his dominating victory in the Grade I Eddie Read Stakes. The five-year-old horse has had a bit of trouble finding the finish line first since his last victory in the 2013 Del Mar Derby (GII), but he’s run well enough to finish second twice and third in his last start in the American Derby (GIII). With Mike Smith aboard, Gabriel Charles settled back in sixth in the field of seven. biding his time to make his closing run. Gabriel Charles had to circle the field on the far outside, but he managed to do so well enough to win by 3-3/4 lengths.

In Arlington’s Hanshin Cup Stakes (GIII), the five-year-old gelding Midnight Cello (Midnight Lute – Mocella, by Johannesburg) claimed his sixth lifetime victory and his first graded stakes race. In 27 starts, the dark bay veteran has never finished worse than seventh, a placing that came in his last start in the Alysheba Stakes (GII). Although a graded stakes victory has evaded him for a while, Midnight Cello put it all together to win the Hanshin Cup in easy fashion. Trapped behind foes at the start, jockey Florent Geroux urged Midnight Cello to the lead, and the gelding settled there quite comfortably. By the final turn, he was ahead by three lengths, and he easily repelled a challenge by Mister Marti Gras to win by 5-1/2 lengths. *Replay unavailable.

The Irish-bred Syntax (Haatef – African Moonlight, by Halling) bested his American competitors over the grass in Delaware Park’s Kent Stakes (GIII). The chestnut colt began his career in his native land before moving to the United States and being placed under trainer Bill Mott’s care, and he has since done fairly well over the American turf with nothing worse than a fourth-place finish in stakes company. With a maiden win and an allowance victory under his belt, Syntax entered the Kent Stakes and was determined to have a solid chance against the field of seven. The colt broke well at the start and settled in fourth for the early stages of the race, but he began making his way towards the leaders down the backstretch. He loomed heavily upon those front-runners at the head of the homestretch, but by the finish line he had made his move strongly enough to defeat Money Multiplier by half a length. *Replay unavailable.

High Dollar Woman (Super Saver – Melissa Jo, by Fusaichi Pegasus) made her first start in graded stakes company a winning one in taking the Grade II Indiana Oaks. The chestnut filly claimed wins in only her debut and an allowance, but she brought out her best effort yet in the Indiana Oaks against fellow three-year-old fillies. Against a field of seven, High Dollar Woman broke well and settled in the three-path as she set the pace with Sweetgrass a length behind in second. That margin would remain throughout the race as High Dollar Woman simply wired the field to claim her first graded stakes victory. *Replay unavailable.

Tiz Shea D (Tiznow – Ender’s Sister, by A.P. Indy) has regularly hit the board in graded stakes events, but he finally claimed one as his own with his win in the Indiana Derby (GII). The bay colt’s most impressive placing came in the form of a second-place finish in the Gotham Stakes (GIII), but he also managed to finish fifth in the Wood Memorial Stakes (GI) and fourth in the Peter Pan Stakes (GII). In the Indiana Derby, Tiz Shea D opted to sit a length behind the persistent, pace-setting Mr. Z. Tiz Shea D made his move with a quarter of a mile left to finish 1-1/4 lengths in front of Mr. Z and Divining Rod. 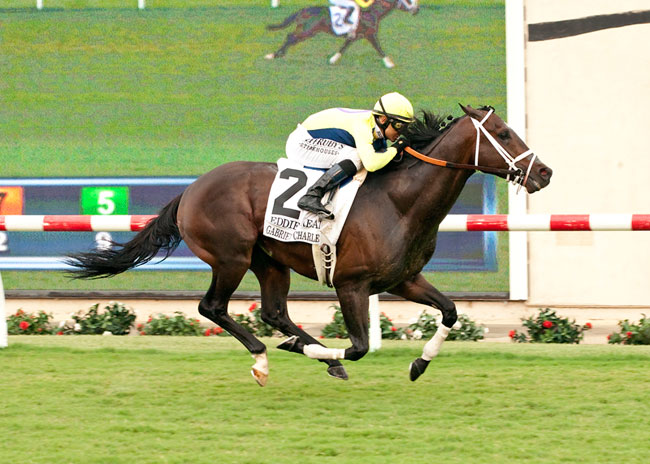 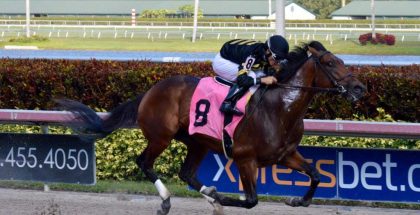