Merry Meadow All Class in Princess Rooney Triumph: Merry Meadow, winner of the Sugar Swirl (G3) and Hurricane Bertie (G3) stakes at Gulfstream Park this winter, returned to her winning ways when shipping in to Hallandale for Sunday’s $250,000 Princess Rooney (G2), a Win and You’re In race for the Breeders’ Cup Filly and Mare Sprint (G1) and one of nine stakes on a $1.75 million Summit of Speed card at Gulfstream Park. 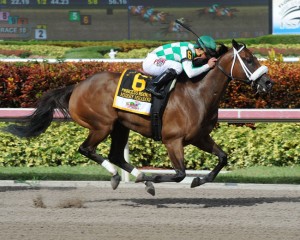 Merry Meadow, winner of the Sugar Swirl (G3) and Hurricane Bertie (G3) stakes at Gulfstream Park this winter, returned to her winning ways when shipping in to Hallandale for Sunday’s $250,000 Princess Rooney (G2), a Win and You’re In race for the Breeders’ Cup Filly and Mare Sprint.
Photo: Coglianese

The 5-year-old daughter of Henny Hughes had not run since finishing off the board in the Inside Information (G2) in March, in which she pressed a quick pace and faded when stretching out to seven furlongs. Back at her best distance at six furlongs, the Mark Hennig trainee ran down Flutterby to score a strong 1 ¾-length victory, the ninth of her 28-race career and the fourth in her last five starts.

“Seven-eighths isn’t her best distance, especially if you take her out of her game,” Hennig said.“She’d rather not be the one having to chase the pace. Last time she kind of just got caught up in the battle early, and Javier, to his credit, didn’t beat her up.”

When the speedy R Free Roll did not break well, the pace scenario in the Princess Rooney changed. Instead of that mare adding to the early speed, Flutterby, trained by Jerry Bozzo, seized the lead, while Merry Meadow, flanked by Tea Time, sat just off her in second. After the first quarter went in 22.19 seconds, R Free Roll rushed up to join the fray, and the pace quickened as the half-mile was timed in 44.23 seconds. Turning for home, only Flutterby and Merry Meadow could go on; those two hooked up at the top of the lane, and a battle ensued, but at the sixteenth-pole, Merry Meadow asserted her class and took command. Under Javier Castellano, the multiple graded stakes winner added another black-type memo to her resume, drawing off alone to the wire. The final time was 1:09.29.

“This wasn’t the trip I was expecting–I thought R Free Roll and Flutterby would go and we could be sitting,” Hennig said.“I was afraid we wouldn’t get by her (Flutterby). That horse is good right now. But I think (Merry Meadow), when she’s fresh and you run her three-quarters, she’s double tough. We had talked about this race for awhile, that’s why we stayed here for the Inside Information (March 21). I could give her a long break after that and send her up to my dad at Payson Park, let her freshen there, and get her back down here in a rested state.”

“It was a perfect trip,” added Castellano, who registered three consecutive stakes victories Sunday, also winning the Miesque’s Approval and Carry Back (G3) with Grand Tito and Grand Bili, respectively. “She was sharp, fresh, and a front-running horse. She wanted to race, so I let her do what she wanted today. It feels excellent to win three straight wins, and I love Gulfstream Park. It’s very exciting.”

Flutterby, exiting a dominant 9 ¼-length victory in Gulfstream’s Sea Lily Handicap on May 30, held on gamely for second under Luca Panici. Had the daughter of Congrats won, she would have made trainer Jerry Bozzo, 94, the oldest trainer to win a graded stakes race.

“No excuse, no complaints,” Panici said. “She ran huge. She ran great. She kicked in when [Merry Meadow] came to me. She tried hard. I don’t have a complaint.”

Merry Meadow, the 7-5 post-time favorite, returned $4.80 to win, while Flutterby paid the same $4.80 to place as the 9-2 third-choice. Kiss to Remember, debuting for trainer Marty Wolfson off a fourth-place finish in the Minnesota H. B. P. A. Distaff Stakes on grass, finished third under Victor Espinoza, returning $4.00 to show.