Bloodlines Reiterate Honor Code’s Prowess: As if intending to warm up the crowd for the upcoming roar evoked by American Pharoah’s Triple Crown claim, Honor Code flew home in the June 6 edition of the Metropolitan Handicap (GI) amidst the well-deserved cheers of Belmont. However, the four-year-old ridgling’s feat on that memorable day is viewed as simply preparation for what connections hope to be even better things, culminating with an intended run in the Breeders’ Cup Mile (GI) at the end of the year. 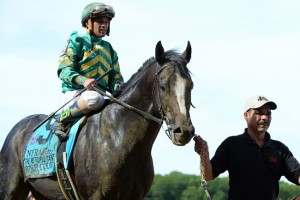 Ridden by Javier Castellano, Lane’s End Racing and Dell Ridge Farm’s Honor Code rallied from his customary spot at the back of the pack to sweep past the field in the Metropolitan Handicap on Belmont Stakes day at Belmont Park. Photo: Susie Raisher, Coglianese/NYRA

Breeder Dell Ridge Farm could not have concocted a better immediate mixture of bloodlines for the striking, dark bay Honor Code. While many of his victories have come at a mile or in a couple of sprints, Honor Code has also proven that he can utilize his closing kick in winning the 1-1/8-mile Remsen Stakes (GII) as a two-year-old. Trainer Shug McGaughey has announced that his new Grade I-winning charge will again stretch out past a mile to target the Whitney Handicap (GI), a 1-1/8-mile Saratoga classic set to be run on August 8.

Fortunately for Honor Code, his undoubtedly meticulously planned pedigree seems to prepare him to handle both his typical mile races and races a little over a mile. His dam Serena’s Cat is by the speed influence Storm Cat and was a stakes winner in turf sprints during her time on the track. A $1.4 million purchase by Dell Ridge Farm, Serena’s Cat has also been an impressive broodmare. Her first foal was Noble Tune, a 2010 foal by Unbridled’s Song who was a multiple graded stakes winner on turf and ran well enough to finish second in the Breeders’ Cup Juvenile Turf (GI). Following Honor Code, Serena’s Cat has had two other foals, a 2012 Bernardini filly named Lady Serena who is a winner at a mile and 1-1/16 miles on the dirt and an unraced 2013 Tapit colt named Morse Code. It’s worth noticing that Tapit carries on the sire line of A.P. Indy, the sire of Honor Code, so if Honor Code serves as any evidence, Morse Code may be a two-year-old to keep an eye on this year.

Serena’s Tune, the second-dam of Honor Code, was a multiple stakes winner of turf sprints and even managed to win a dirt sprint. Ultimately racking up seven victories in fourteen lifetime starts, the daughter of the speedy Mr. Prospector produced no other foals as successful as Serena’s Cat but had some winners nonetheless. Mutawahej, a full sibling to Serena’s Cat, sold to Shadwell Farm for a whopping $3.1 million but fell far short of his sister’s success in failing to win on the turf in Europe. Noble Sound, a 2005 colt by Vindication, however, was a perfect three-for-three in dirt sprints, and his full brother Vocalised claimed a few weight for age stakes in Europe.

Most recognizable in Honor Code’s female family is the presence of the great Serena’s Song, his third-dam. The champion daughter of Rahy amassed a record of 38-18-11-3, winning a great number of races for veteran trainer D. Wayne Lukas and assuming the title of 1995 Champion Three-Year-Old Filly. Serena’s Tune was her first foal, and her following produce stamped her dominance as a broodmare. Grand Reward (2001 Storm Cat) won the Oaklawn Handicap (GII), and his full brother Schramsberg (2006 Storm Cat) claimed the John B. Connally Turf Cup Handicap (GIII) among many other listed stakes races. Her 2002 Unbridled colt Harlington won the Gulfstream Park Handicap (GII) like his young relative Honor Code. While her daughters failed to directly produce any major winners, Sophisticat (1999 Storm Cat) did produce Sefroua, a stakes-placed daughter of Kingmambo.

Honor Code’s damside provides plenty of speed influence along with a bit of stamina, but his sire A.P. Indy, one of the most influential modern stallions of the American thoroughbred, really provides a reservoir of stamina. A Belmont Stakes and Breeders’ Cup Classic winner, A.P. Indy became a stellar sire. Among his classic winners are Preakness champion Bernardini, Horse of the Year Mineshaft, and Belmont winner Rags to Riches, indicative of his ability to pass on his staying power.

Although it seems like Honor Code may be best suited for the mile distances at which he’s been excelling, it is best to not count out the burgeoning closer for the slightly longer races either. With the combination of A.P. Indy and Serena’s Song’s tail-female line, Honor Code may not have found his limit yet. 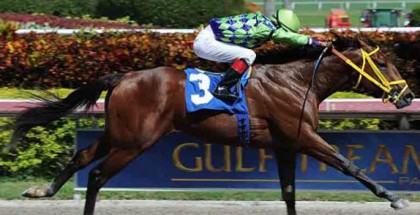 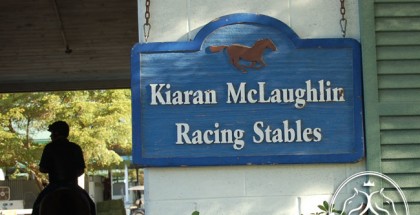