Comparing American Pharoah to Secretariat: Capturing the Triple Crown by winning the Belmont Stakes (GI) put American Pharoah in at least one club that Secretariat has belonged in for years. Both horses are Triple Crown champions now and will remain that way forever. But, the similarities do not end there. This article will attempt to convey that American Pharoah is close to reaching Secretariat’s legendary status, and just needs a few wins against older horses to possibly reach the same reverence fans hold for “Big Red” today. 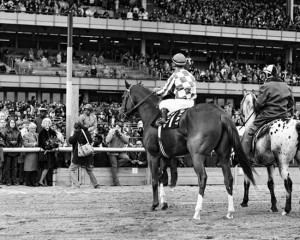 For starters, both horses won the Two-Year-Old Horse Eclipse Award. Secretariat’s initial season was fantastic, as he won seven out of nine starts including the Sanford, Hopeful, Futurity, Laurel Futurity and Garden State. None of those races show a graded label next to their name, at least not according to the past performances found on the Secretariat website. They likely did not grade races that year, as some of them in their current form show a graded status. Secretariat also finished first in the Champagne at Belmont Park, but was disqualified because he “bore in.” Secretariat’s other loss that year came in a maiden race.

American Pharoah’s season last year was not close in terms of quantity. He only ran three times. What American Pharoah lacks in depth, he makes up in quality as two of those wins came in Grade I events, the Del Mar Futurity and FrontRunner. The win at Del Mar came over future stakes winner Calculator. At Santa Anita in the FrontRunner, some notable names from that race were Calculator again, Texas Red and Lord Nelson. Like Secretariat, American Pharoah lost in a maiden race, his career debut. Most people can forgive a poor debut.

In his three-year-old season, Secretariat ran 12 times! For a modern graded stakes level horse, that is unheard of. Of course, he won the Triple Crown by winning the Kentucky Derby, Preakness and Belmont. Interestingly, Secretariat’s only other Grade I win that year ended up being the Man o’ War on turf at Belmont Park. He also won the Bay Shore (GIII), Gotham (GII), Marlboro Cup Invitational over Riva Ridge and Canadian International (GII).

Fans remember Secretariat’s dominating Belmont Stakes performance, where he won by 31 lengths, more than any other of his races. Winning by a blowout margin in a dirt marathon happens more often than people think. Nevertheless, the effort was impressive. The final time of 2:24, as well as a hypothetical 139 Beyer Speed Figure, confirm the quality of the win.

Unfortunately, Secretariat did lose a couple of times too in his three-year-old season. He finished third in the Wood Memorial (GI), and settled for runner-up finishes in the Whitney (GII) and Woodward (GI) against older horses. 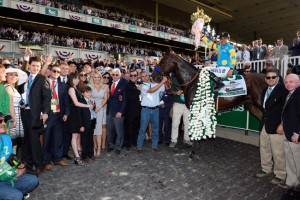 His Belmont final time of 2:26.65 may not match Secretariat’s 2:24, but for a modern thoroughbred going 12 furlongs, finishing in 2:26 is quite impressive.
Photo: Coglianese/NYRA

While not done, American Pharoah is on the right path with his own Triple Crown, plus wins in the Rebel (GII) and Arkansas Derby (GI). His Belmont final time of 2:26.65 may not match Secretariat’s 2:24, but for a modern thoroughbred going 12 furlongs, finishing in 2:26 is quite impressive. They both went straight to the lead and dared anyone to catch them. Secretariat put away Sham in his Belmont win, and American Pharoah disposed of the talented (and inexperienced) Materiality.

Early reports indicate that he might go for one of the summer three-year-old races next, such as the Haskell (GI) at Monmouth. After that race, two more are likely including the Breeders’ Cup Classic. If they can give American Pharoah one prep race versus older horses before the Breeders’ Cup, that would potentially give the star colt two wins against older horses to end his career.

Secretariat lost more times because he ran more often. If American Pharoah ran that many times, he would have won most of them with his talent. At the very least, no one can definitely say Pharoah is not capable. As for turf, that would only be icing on the cake if they gave American Pharoah one try on turf before the Breeders’ Cup. Secretariat won twice on turf.

Regardless, being a legendary racehorse is about more than just the record. Great horses make people feel a certain way, and everyone feels great about this Triple Crown win. Kids that watched American Pharoah will go on and tell their kids about his greatness, while Secretariat was not experienced first-hand by many fans. Maybe American Pharoah is already on the same level. 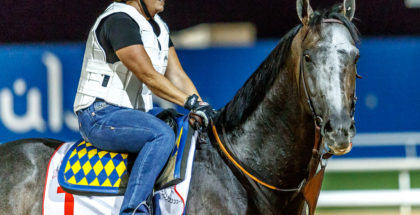 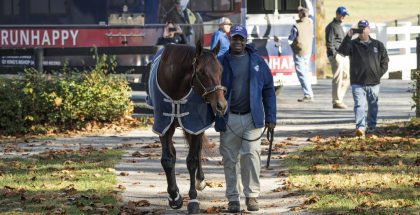