Holy Boss Progressing Toward Possible Breeders’ Cup Sprint Start: The year is just beginning for horses who have no part in the Triple Crown. Horses are starting to work their way into regular race schedules with the goal of possibly targeting the end of the year championships. The Breeders’ Cup will take place at the historic Keeneland Race Course in October. Horses are starting to catch eyes and are helping fans plan out which horses they want to see in the fourteen Breeders’ Cup races.

Holy Boss won impressively on the Preakness undercard this past weekend in the Chick Lang Stakes over other promising young sprinters, including Blame Jim and Gimme Da Lute. Holy Boss was able to contend with top speed and then pull away from Victory is Sweet to win comfortably by two lengths. Gimme Da Lute finished third as the favorite.

Holy Boss has been slowly working his way up the ranks. He broke his maiden going six furlongs in September over the Churchill Downs main track. His next win did not come until March of this year in a six-furlong allowance optional claiming race at Oaklawn. He then moved on to win the listed Bachelor Stakes at Oaklawn. In this race, Holy Boss defeated highly regarded horses Bayerd and I Spent It as he took the field gate to wire.

Holy Boss is bred to be fast and consistent. As the son of top sprinter Street Boss, the colt was destined to be fast. Street Boss has sired every type of runner, however. He has thrown Kentucky Derby third-place finisher Danza, a colt who also won the Arkansas Derby in 2014. Capo Bastone won the King’s Bishop (GI) but never won another race. Holy Boss and Metaboss (winner of the El Camino Real Derby) are other top earners for the stallion. Street Boss was a consistent sprinter in his race days although he never traveled further than seven furlongs and never won a race over six furlongs. He was a dual Grade I winner after taking both the Bing Crosby and the Triple Bend Invitational Handicap, and he won the Grade III Los Angeles Handicap before finishing third in the Breeders’ Cup Sprint (GI) behind Midnight Lute and Fatal Bullet. Street Boss retired and entered stud in 2009 at Darley where he currently stands for a fee of $10,000.

Holy Boss is also a descendant of the 1994 Horse of the Year and Champion Three-Year-Old Colt, Holy Bull. While Holy Boss’s dam Holy Grace was a two-time winner at the allowance level, her sire was the real star. Holy Bull was the 1994 Kentucky Derby favorite, but on a sloppy track, he faded to twelfth to allow Go for Gin to take the first leg of the Triple Crown. After skipping the remainder of the Triple Crown, Holy Bull would not finish worse than first until the 1995 Donn Handicap when he was injured and did not finish the race. Holy Bull would earn 1994 championship honors with wins in races such as the Met Mile (G1), Haskell (G1), Travers (G1), and Woodward (G1). While none of his offspring accomplished what Holy Bull did, he did sire Macho Uno, winner of the 2000 Breeders’ Cup Juvenile and Two-Year-Old Champion Colt. In 2005, Giacomo won the Kentucky Derby at odds of 50-1. In 2007, Flashy Bull won the Stephen Foster Handicap (GI). Holy Bull was pensioned in 2012 and currently resides at his home, Darley.

Holy Boss would not need a Grade I win to be a top contender in this year’s sprint division and to head to Kentucky as a Breeders’ Cup Sprint starter. However, there are three qualifying races for the Breeders’ Cup Sprint, starting on August 29 with the Grade I Forego Handicap at Saratoga. Then, there is the September 26 Vosburgh Invitational Stakes at Belmont, also a Grade I event. The last qualifying race will be the Stoll Keenon Ogden Phoenix Stakes at Keeneland. A race over the track for Holy Boss may not be such a bad idea, and trainer Steve Asmussen knows how to get his horses ready for big races. If Holy Boss were to head for the Breeders’ Cup Sprint, one of these races may be where he would start. 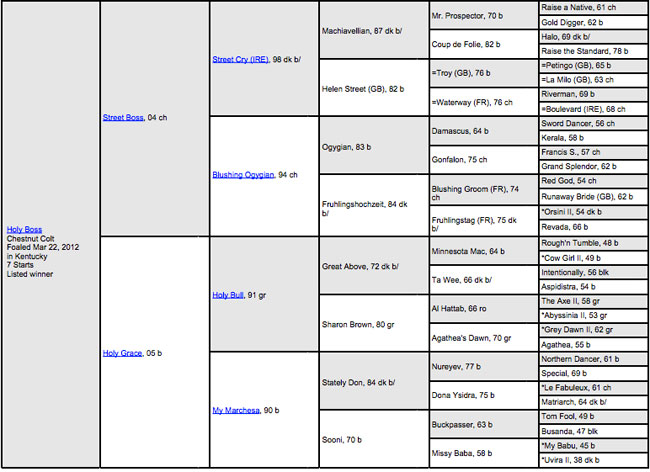 Holy Boss is bred to be fast and consistent. As the son of top sprinter Street Boss, the colt was destined to be fast.
Photo: www.equineline.com