Handicapping Kentucky Derby Day 2015 Picks & Plays: The most awaited weekend in the racing world has arrived! The main event is the Kentucky Derby, but the undercard also presents quality fields and interesting races. Here’s a handicapping look at the Derby day stakes for those who want to enjoy the races and try their luck at making some money. 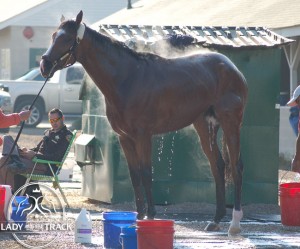 Danzig Moon, pictured above at Churchill Downs, is improving daily in preparation for the 141st running of the Kentucky Derby on Saturday, May 2, 2015. Photo: LATT

Pat Day Mile Stakes – Grade III
Race 5: 5, 6
The Pat Day Mile Stakes (GIII), formerly known as the Derby Trial, over one mile will be a match between two nice horses, Lord Nelson and Competitive Edge. I’m giving the slight edge to Lord Nelson, a horse who was competing on the Derby Trail until his connections realized he would run his best in one-turn races. In his last start, Lord Nelson lost an incredible race in the Bay Shore Stakes (GIII); he had some troubles in the early stages that sent him to the back of the pack, and he ran very wide. Nonetheless, he was able to fly in the stretch to lose by just half a length. Competitive Edge is a Pletcher trainee who is unbeaten in three starts. At one point, this horse was considered to be a Derby horse, but an injury sidelined him as a two-year-old. After a long break, the horse returned on March 27 with a nice eight-length victory over another previously unbeaten horse, Mr. Jordan, who inexplicably lost last week against a weak field. I must say that Competitive Edge is a good horse, but Lord Nelson has been facing tougher competition, and that can make a difference. In this race, I’m playing Lord Nelson to win.

American Turf Stakes – Grade II
Race 6: 8, 5
During the Derby Trail, Conquest Typhoon earned points to make the Derby with a nice run to a second-place finish in the Spiral (GIII), but his connections decided to bring him back to the turf, a surface he loves. His best races were on the turf, including a nice fourth-place in the Breeders’ Cup Juvenile Turf (GI). Another Lemon Drop was another horse with Kentucky Derby intentions, but running on the dirt is definitely not his strength. Now returned to the grass, he should be able to show his best and will try to upset the favorite at nice odds. Conquest Typhoon should be the favorite, so I’m just going to play an exacta box with 8 and 5.

Humana Distaff Stakes – Grade I
Race 7: 8, 2, 3
Judy the Beauty has not raced since her victory in the Breeders’ Cup Fillies and Mares Sprint (GI) at Santa Anita. She needs this race to get her back into racing form, and she is a mare that always fights and is in the mix. Simply due to Judy the Beauty’s layoff, I’m trying to beat her with Thank you Marylou, a filly that could take advantage of a hot pace. Curiously, she is unbeaten at the seven-furlong distance that she will face here. Another filly with a chance to win is Dame Dorothy; this daughter of Bernardini should appreciate the return to sprint races. I’m not betting a heavy favorite returning from a six-month layoff, so I’ll be betting Thank you Marylou to win and place.

Churchill Distaff Turf Mile Stakes – Grade II
Race 8: 4, 5, 8
Lady Lara has done nothing wrong since arriving in America. In her last race, despite the fact that she suffered a lot of troubles during the race, she was able to win. If she gets a clean trip in this race, she will be very tough to beat. Coffee Clique failed as the favorite in her return from a long layoff after being defeated by the aforementioned Lady Lara. Coffee Clique may improve in her second start off the layoff, and as a Grade I winner, she deserves a shot. Sandiva faced some issues in her last race and finished in second, just a neck behind Lady Lara. Sandiva is a gutsy filly, and Javier Castellano stays in the irons, so you can’t miss this race with her.

Churchill Downs Stakes – Grade II
Race 9: 2, 4
Breeders’ Cup Classic winner Bayern is back! He has recovered from his quarter crack issue and has been working like a freak. The distance is not an issue since he smashed the field in the Woody Stephens last year over seven furlongs. If Bayern fails because of the layoff, the horse that can challenge him is Private Zone, a valiant horse who will try to take the lead and wire the field. This is not a good race to bet; just have fun, and enjoy the show!

Woodford Reserve Turf Classic Stakes – Grade I
Race 10: 10, 9, 1
This is a beautiful race to try to hit jackpot with a longshot. Chocolate Ride is on a winning streak and has been beating increasingly tough horses in each of his races. This would be his first Grade I race, but due to the way he is winning, he deserves a shot. Seek Again is a horse that almost beat Wise Dan last year. He has not raced since the Breeders’ Cup Mile (GI), but he looks like the class of the field. Optimizer is another horse returning from a long layoff, but his trainer has a good winning percentage with those kinds of horses. This horse is truly a Grade I horse, but he could be forgotten at the betting window, perhaps providing a chance to win at huge odds. In this race, I’m playing an exacta box with 1, 9, and 10.

Kentucky Derby Presented by Yum! Brands – Grade I
Race 11: 8, 5, 10, 19
The luck of the champions helped Dortmund since he claimed the eight-hole in the draw. Dortmund is undefeated in six starts and showed tenacity when everybody considered him to be put away. This horse should be able to run near the lead, thus avoiding traffic troubles. This big horse may not have problems with the distance, either. Danzig Moon is a horse that is improving at the right time, most recently finishing second in the Bluegrass Stakes at Keeneland. After that effort, he has been working steadily, looking like he is just going to peak for the Derby. If there’s a pace meltdown, this horse can run late and cause some damage, perhaps providing the opportunity for him to win the race. Firing Line impressed everybody during his last workout as he gave the impression he wanted more ground. If he’s able to relax a bit early, he will surely be in the mix. Upstart drew the nineteenth hole, and fortunately he seems to have recovered from his illness, looking very good in the mornings. This horse ran twice over a tiring track at Gulfstream Park, and he should now appreciate the Churchill Downs track. Maybe he’s not good enough to win, but he can hit the board. If there’s a late scratch and Frammento enters, you can use him as well because he is a true 1¼-mile horse. You can use any of these horses to make your exotic plays. Also, I’m playing Danzig Moon to win, place, and show.