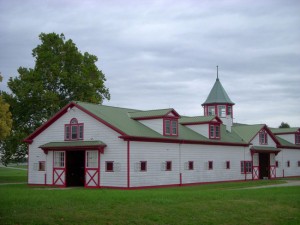 No contemporary farm can match the titanic accomplishments of Calumet Farm, especially in regards to breeding and owning Kentucky Derby winners.
Photo: viewsfromavetswife.com

Originally established in 1924 as a Standardbred farm by Calumet Baking Powder owner William Monroe Wright, the respected Lexington farm shifted to focus on Thoroughbred breeding and racing after the patriarch’s death. Under Warren Wright, Sr., Calumet would rise to heights unknown in the horse racing world.

In 1936, Calumet prudently decided to buy an interest in the stud career of Blenheim II and purchased Bull Lea as a yearling. Each of these horses helped kick-start the success of Calumet’s breeding program, with the latter becoming a five-time leading sire.

Nellie Flag was the first champion to rise from Wright’s farm, and there would be many more to follow. Such greats as Twilight Tear, Armed, Coaltown, Bewitch, Barbizon, Davona Dale, and Alydar hailed from Calumet and later returned there to aid in the proliferation of the farm’s success.

An unparalleled nine Kentucky Derby champions have been bred by Calumet, and eight of those wore the once recognizable “devil” red and blue silks of their breeder to victory in the Run for the Roses to collect the most Derby victories ever won by an owner.

Perhaps the most notable of Calumet’s Derby winners are Whirlaway and Citation, the Triple Crown winners of 1941 and 1948, respectively. Whirlaway was also the first Calumet colt to wear the roses, and his victory attracted prestige for the farm. Pensive followed with a victory on the first Saturday in May in 1944 before the rise of the great Citation, and the farm won two consecutive editions of the Kentucky Derby when Ponder picked up the win in 1949. It didn’t take long for another Calumet homebred to take the famous race under the twin spires when Hill Gail arrived to run in 1952. Calumet pulled off another double when Iron Liege and Tim Tam took the 1957 and 1958 runnings of the Kentucky Derby. Forward Pass was the last Calumet bred and owned horse to win the Kentucky Derby via the disqualification of Dancer’s Image in the 1968 edition, but the farm did breed and sell 1991 winner Strike the Gold to BCC Stable.

Calumet’s creation of Alydar is perhaps one of farm’s most notable claims to fame. Alydar and Affirmed were nearly inseparable during the 1978 racing season, and a rivalry ensued that found Alydar finishing closely behind Affirmed in each Triple Crown event. Alydar went on to become an important stallion for Calumet, and the decline of the farm accelerated with his death in the 1990s.

The farm has since changed hands and is now controlled by the Calumet Investment Group. Attempting to return the farm to its former glory is Brad M. Kelley who leases the farm. The red and blue silks of the past have since been replaced by Kelley’s black and gold colors. Under those fresh silks, Oxbow’s victory in the 2013 Preakness Stakes marked the return of Calumet to the winner’s circle in a Triple Crown event for the first time since 1968.

If all goes well in the farm’s improvement, perhaps Calumet-breds will return in the near future to once again dominate the Kentucky Derby.