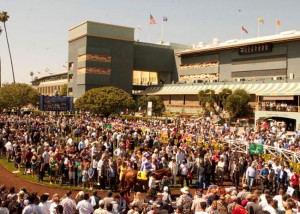 Race #4: 2, 1, 4
Papacoolpapacool looked impressive in his last race as he ran very easily in the stretch and passed horses with no opposition. In addition, he should appreciate the stretch out to 1-1/8 miles. Papacoolpapacool should win this listed stakes handily while looking towards graded stakes races for his next start. Anytime Anyplace was sent to the lead to try to wire the field in his last race but finished second to the aforementioned Papacoolpapacool. This time the distance will not be on his side, but he will add Kent Desormeaux to the saddle, a move that could help him a lot. For exotics, Hero Ten All is a good choice since he has been facing tougher horses and is now trying the grass for first time, a surface he ought to love according to his pedigree.

Race #6: 3, 5, 9
War Destiny failed as the favorite when he tried grass for first time over Santa Anita’s downhill surface at 6½ furlongs. After that poor effort, War Destiny recorded a very nice workout, indicating that he is fit. The horse is returning to the dirt, so a big improvement is expected. Forest Blue is making his debut after a series of good workouts. A point worth noting is that typically the sons of Tale of Ekati win early, so all signs seem to point to the fact that this horse is ready for a nice effort. Alamo is always in the mix and has faced good runners. If he breaks well, he should be very dangerous.

Race #7: 1, 6, 9
Three Hearts lived up to her name and showed a big heart in her last race in finishing in second place, a really nice performance for this Neil Drysdale trainee. Three Hearts has the ability to rate, so if the pace turns hot, she can stalk and make her move entering the stretch. Diversy Harbor likes the distance and will roll late. Last year she was second in the American Oaks (GI) over 1¼ miles, so the distance is not a concern. The longshot of this race could be Arethusa; I know she’s moving up in class and beat a weak field in her last race, but she has always been considered a nice filly and looks to have found her strength on the turf.

Race #9: 9, 11, 10
Village Kitten was improving with each race until he tried dirt for first time. Now he’s returning to the turf and is thus a candidate to improve and win this race. Miltee is dropping in class after facing horses like Papacoolpapacool, Soul Driver, and Metaboss. If he repeats his efforts of any of those races, he will be very tough to beat. Passinaflash improved in his first start on the turf and has now added Flavien Prat to the saddle, a jockey who has been hot lately.