Carpe Diem Takes Tampa Bay Derby For Stonestreet and WinStar: After a four-month layoff, Carpe Diem won the Grade 2 Tampa Bay Derby for trainer Todd Pletcher and owners Stonestreet Stables and WinStar Farm, proving the colt belongs in the discussion of the best three-year-old in the nation. For Pletcher, this has been a roller coaster week after losing one of his top Derby prospects in Khozan. With his large stable of runners, however, he always seems to find another candidate. 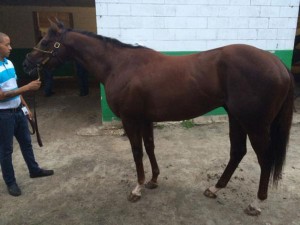 Unfortunately for trainer Kiaran McLaughlin, his star colt Ocean Knight (also owned by Stonestreet) failed to fire and finished a non-threatening seventh. McLaughlin currently is running a mysterious losing streak as he holds a 0 for 26 record in Florida since February 1.

On the opposite end, Carpe Diem improved his overall record to 4-3-1-0 and picked up 50 qualifying points for the Kentucky Derby in May. This brings his overall point total to 64, guaranteeing a spot in the Derby starting gate. A son of Giant’s Causeway and the Unbridled’s Song mare Rebridled Dreams, Carpe Diem cost $1.6 million at OBS March 2014. The win today was nothing short of visually impressive.

After the break, Divining Rod, son of excellent turf runner Precious Kitten, and My Johnny Be Good went for the lead early with Divining Rod holding a slight advantage. Moonlight Bandit tracked the leaders closely on the outside in third. Carpe Diem settled into the box and saved ground through a fairly swift pace of :23.10 for the opening quarter and :46.65 for four furlongs. Ocean Knight followed on the outside in midpack.

Approaching the final turn, Divining Rod put away My Johnny Be Good, but Carpe Diem began to rally, as did Ocean Knight on the outside and Ami’s Flatter on the rail. The six-furlong split went in 1:11.65.

When they hit the straightaway, Carpe Diem’s win became clear as he drew off under mild urging from jockey John Velazquez. Ami’s Flatter continued his bid for second, whereas Divining Rod faded to third. Ocean Knight was not persevered with once his defeat became clear. Carpe Diem hit the one-mile mark in 1:37.22 and earned a final time of 1:43.60.

Considering Carpe Diem’s pedigree, his form looks set to improve once the races start lengthening. Although exceptions occur, Giant’s Causeway progeny tend to love longer distances, and Unbridled’s Song on the bottom-side does not hurt his Derby potential either.

Despite owning a route pedigree, Carpe Diem won his career debut in a sprint at Saratoga by two lengths over Ready for Rye, the horse that just won the Grade 2 Swale at Gulfstream Park, and then Carpe Diem dominated Mr. Z in the G1 Breeders’ Futurity at Keeneland. His streak ran out in the Breeders’ Cup when he finished second to Texas Red, but perhaps more experience and maturity can pull this colt to a higher level.

Pletcher also won an ungraded stakes with another rising three-year-old named Materiality on Friday at Gulfstream Park, and fans must wonder what other talented horse will come out of his barn next weekend to make headlines.

Zenyatta: The Nonpareil Matriarch of Racing