Main Sequence Wins Mac Diarmida at Gulfstream Park; Another Run at HOTY?: Facing an extremely slow pace and familiar foe, 2014 Horse of the Year finalist Main Sequence took aim for the stretch run and mowed down Twilight Eclipse to win the 2015 G2 Mac Diarmida at Gulfstream Park impressively. The layoff since winning the Breeders’ Cup Turf over a difficult field had no affect on the star turf horse.

Change in Command set fractions in a snail-like 26.07, 50.92, 1:16.17 and 1:40.29 after one mile. Main Sequence relaxed near the rail for the first part while the leaders dawdled, and approaching the final turn jockey Rajiv Maragh tipped his mount outside for a clear run and his class proved too much. He earned a final time of 2:15.06 for the 11 furlong distance.

With the victory, the son of Aldebaran improved his North American record to 5 for 5 for trainer Graham Motion and owner Flaxman Holdings, after a rough start to his career in Europe.

Motion praised his horse’s late turn of foot in the track press release on Saturday, February 21, 2015.

“I was a little concerned at the top of the stretch because it looked like he kind of asked him and they motored away from him a little bit. But once he got that turn of foot going, he’s gone. There’s not much stopping him,” Motion explained.

Unfortunately for runner-up Twilight Eclipse, he finished behind Main Sequence for the fifth straight time! The last four tries came in G1 races including the United Nations, Sword Dancer Invitational, Joe Hirsch Turf Classic and Breeders’ Cup Turf. Without Main Sequence’s existence, Twilight Eclipse would have won at least the United Nations and Joe Hirsch, as he finished second in those races and third in the other two.

“Today we got first run (on Main Sequence) but we still couldn’t beat him,” Albertrani said.

Some fans wonder if Main Sequence can make another run at Horse of the Year. Last year, he finished third as a finalist, while winning Champion Older Horse and Grass Horse.

The chances of seriously challenging for the biggest title seems dim given that older main track horses California Chrome and Shared Belief remain active. In addition, while former Horse of the Year Wise Dan shows no recorded workouts lately, the gelding is extremely popular and should attract votes with a decent campaign plus a Breeders’ Cup win. To add to those roadblocks, the new three-year olds pointing towards the Kentucky Derby are exciting as well, and perhaps one of them rises as the dominant force.

But, looking at Main Sequence’s top-half pedigree, interestingly Aldebaran ran as a long distance dirt sprinter for most of his career in the United States. Although Aldebaran ran third in the nine furlong 2001 Hollywood Derby on turf, his races after that came in longer sprints or one mile races on the main track. Eventually, the versatile horse won three G1 dirt races: the San Carlos, Metropolitan Handicap and Forego.

On the bottom side, Main Sequence looks very European with many turf influences. Perhaps they should try dirt at some point in the year though, considering his sire’s success running on both surfaces. Think about Cigar. Being sired by grass horse Palace Music never prevented him from accomplishing a few things on dirt.

Then again, maybe Main Sequence’s connections are perfectly content with aiming for the older turf horse Eclipse Award again, and if so, that is a fine goal to become a three-time Eclipse Award winner. 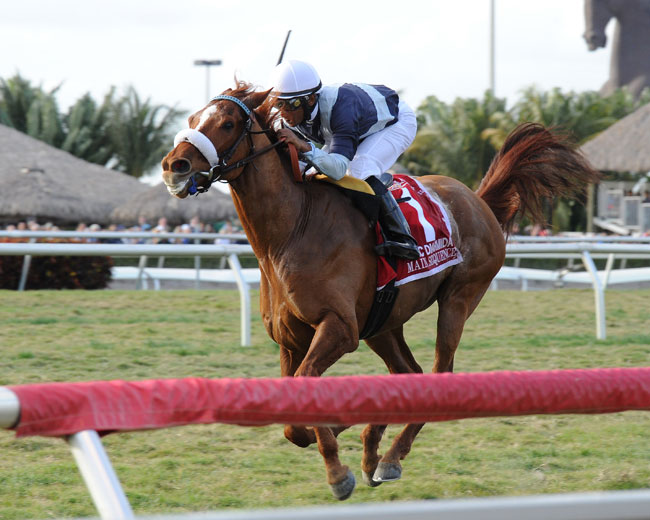 In the clear on the outside of horses at the top of the stretch, Main Sequence surged past arch-rival and defending race champion Twilight Eclipse with a dramatic rush in the final sixteenth of a mile to capture the $200,000 Mac Diarmida (G2) by three-quarters of a length. Photo: Lauren King, Coglianese Photos

Controversy Clouds Itsaknockout’s Win Over Upstart in Fountain of Youth