Santa Anita Saturday Picks and Plays February 14, 2015: Santa Anita Park will not be hosting any Kentucky Derby prep races this weekend, but the beautiful California track will be offering some very competitive races for the late Pick 4, including the Grade 2 Santa Maria Stakes for older fillies and mares. After a handicapping flop last weekend, we are hoping to bounce back this week with a solid analysis of the late Pick 4. 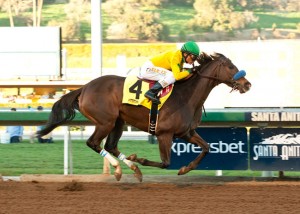 Santa Anita Saturday Picks and Plays for February 14, 2015 include Thegirlinthatsong (pictured above) in the Santa Maria Stakes. Photo: Benoit

Holiday Maker won her last race coming off the pace, showing a big improvement from past performances. She’s facing similar company and will have more ground to make her late run, but this time she is starting from the one-hole, a fairly awkward post position for the short distance of 6½ furlongs. Take Back Springs is dropping in class, and she should like the sprint distance in this race. I like her Gutierrez–O’Neill combo, especially in these claiming races at Santa Anita. There doesn’t seem to be too much speed in this race, so Where is My Mind may be able to use her early speed as a weapon to attempt a wire-to-wire victory.

Boat Drinks made her debut at Santa Anita Park on January 3, 2015. Mio Me finished first in that race, a filly entered in the Sweet Life Stakes later in this card. Since that effort, she recorded two excellent workouts and looks ready to wire this field of maidens. Sadler’s Well’s progeny typically improve in their second starts, so with just a little improvement Boat Drinks should easily win this race. I’m using her as a single.

In the Grade 2 Santa Margarita Stakes, I’m choosing the two proven “now” mares and adding one that is improving with each race. Warren’s Veneda smashed the field in the 1-1/16-mile Paseana Stakes, winning by a widening 5½ lengths. This mare is in the best shape of her career, and as a stalker, her fast-paced running style perfectly suits this race. While everybody was expecting a match between Lexie Lou and Jojo Warrior in the Grade 2 La Canada Stakes, Thegirlinthatsong surprised the field by running strongly in the stretch and winning by 4¼ lengths. However, that was a suspect field since Lexie Lou definitely did not like the dirt and Jojo Warrior was retired after her performance. Valiant Emilia is looking better race by race and continues to work very well. There is plenty of speed in this race which could benefit her tendency to stalk and overcome the pacesetters.

Bobbi Grace could have won her last race by several lengths, but jockey Gary Stevens never urged her so she just won by the necessary edge in a very stylish performance. If she repeats that effort, she would be very tough to beat. Mio Me’s first try on the dirt was a flop, so her connections are returning her to the turf and cutting back the distance. She looked pretty good on the downhill turf when she broke her maiden, a promising advantage she may hold over her competitors. Wedding Brush has the pedigree to love both grass and sprint races. She last worked a sharp five furlongs in 1:00.2 on February 8, and if her jockey lets her run her race, she could be quite dangerous.

Ride On Curlin Aims For Route Win in Essex at Oaklawn 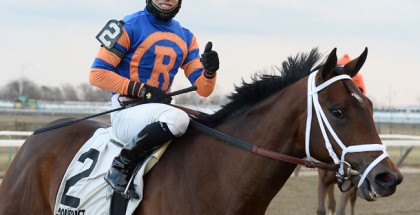