Withers Winner Far From Over Possesses Perfect Route Pedigree: After an awkward beginning and trailing the field for most of the G3 Withers, the Todd Pletcher trained Far From Over put in a determined rally through the inside and won his first attempt at a stakes race on Saturday, February 7, 2015. Only one word describes the stretch run: determined. 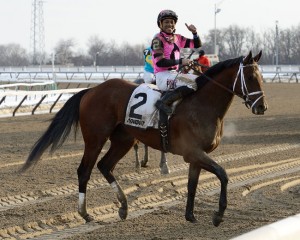 Far From Over and jockey Manuel Franco put in a determined rally through the inside and won the colt’s first attempt at a stakes race in the Withers at Aqueduct on February 7, 2015.
Photo: Joe Labozzetta, Coglianese/NYRA

With the win, Far From Over’s record remains unblemished at 2 for 2 and the Blame ridgling earned 10 qualifying points for the Kentucky Derby in May. A quick pedigree analysis suggests no foreseeable distance issues if his connections go in that direction.

Not every handicapper or pedigree expert analyzes a horse’s family the same way. In Far From Over’s case, the preference for distance seems clear cut.

Of course, Blame won the 2010 G1 Breeders’ Cup Classic at 10 furlongs over the legendary Zenyatta, which gives Far From Over route credibility from the start. Blame won other route races too, including the nine furlong 2010 Whitney and Stephen Foster Handicaps (both G1s), 2009 Fayette Stakes and Clark Handicap the same year. In addition, Blame finished second in the 2010 Jockey Club Gold Cup to the loose on the lead Haynesfield.

Interestingly though, Blame’s dam Liable only succeeded in sprints, winning six races. But, Liable’s sire Seeking the Gold ran as a consistent performer in dirt routes with wins in the nine furlong Peter Pan and Dwyer, and the Super Derby as well.

As for the bottom side, Far From Over’s dam Alchemist only won four races out of 17 starts, and three came in routes. The other one came in a seven furlong sprint.

With the great A.P. Indy as Alchemist’s sire, the fact that she broke her maiden in a longer sprint and won only route races afterward makes sense as most A.P. Indy progeny hate shorter distances. The son of Seattle Slew took home the 12 furlong Belmont Stakes and Breeders’ Cup Classic in a 1992 Horse of the Year season, and might have won the Jockey Club Gold Cup the same year too after a late start similar to Far From Over’s in the Withers. A.P. Indy came wide though and flattened out for third.

Alchemist’s dam Aldiza ran in a mixture of races during her career including sprint, route, turf and dirt races. Out of six wins, three came in sprints and three came in routes. The last win ended up as a good one, as Aldiza finished first in the 1998 Go for Wand Handicap at nine furlongs over a solid field, including champion older mare Escena.

Her sire Storm Cat won the 1985 G1 Young America Stakes, also at a route distance, before finishing second in the same year’s Breeders’ Cup Juvenile. The future breeding star only ran twice the following year, but today most handicappers and fans know Storm Cat as a strong influence on the current breed.

The dam of Storm Cat, Terlingua, performed as an excellent female racehorse. Trainer D. Wayne Lukas thought highly enough to start the filly against males in the 1978 Hollywood Juvenile Championship, a sprint race which she won, and the nine furlong Santa Anita Derby the following year, where she unfortunately finished fifth. She won the Santa Susana Stakes at a route distance the race before. Fans know the race as the Santa Anita Oaks today.

Far From Over’s immediate siblings display spotty records at best. The most talented one, And Why Not, placed in a couple of graded stakes races including the 2011 G1 Spinaway and G2 Pocahontas at one mile. Next year, she ran second in the nine furlong G3 Obeah, before running third to Royal Delta in the 10 furlong G1 Delaware Handicap.

Overall, stamina influences overwhelm Far From Over’s pedigree. Only Liable shows questionable route ability in Far From Over’s immediate family tree. Furthermore, Pletcher knows how to train horses to go far if recent editions of the Belmont Stakes are evidence. Lightly raced and full of promise, Far From Over receives an A for longer distance potential.

After The Homestretch Arizona; Reaching Out To Help Horses 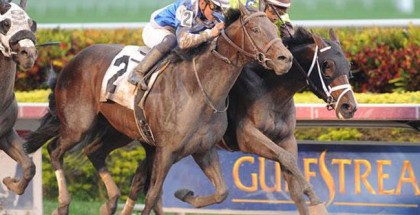 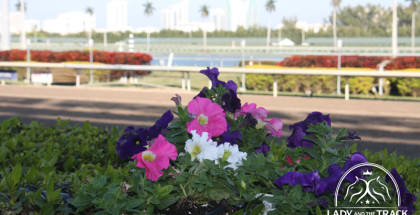 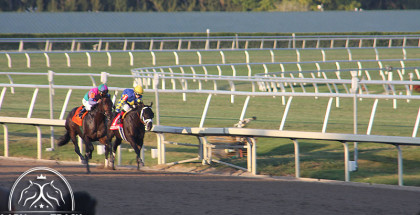