Social Inclusion Points Towards Late March Comeback: On Dec. 3, Rontos Racing Stable owner Ron Sanchez posted a picture of a slightly unfit Social Inclusion to make the announcement that his Pioneer of the Nile colt recently returned to training earlier this month at Palm Meadows. Social Inclusion is scheduled to race at the upcoming Championship Meet at Gulfstream Park. 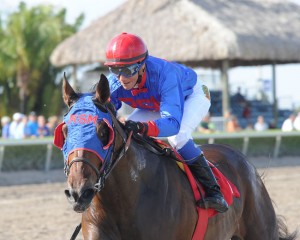 When asked over Twitter about a possible rematch with Honor Code in the G2 Gulfstream Park H., Sanchez replied “No, we will go first in an Allowance race at the end of March.”

Social Inclusion found success earlier in the year, winning his career debut in February by seven lengths and following that with a 10 length win over the talented Honor Code in a March allowance race. Both efforts came at Gulfstream Park under trainer Manny Azpurua. His second win earned Social Inclusion a 111 TimeformUS speed figure and 110 Beyer Speed Figure, while the internet became lit up with hype and question marks concerning whether the young colt could sustain those efforts.

In April, the connections decided to give Social Inclusion a shot at making the Kentucky Derby and entered their colt in the G1 Wood Memorial at Aqueduct. After starting from the widest post and setting the quick tempo up front, Social Inclusion faded late and finished third. Late-runner Wicked Strong benefited from the pace and rallied for the win.

This left Social Inclusion on the bubble in terms of Kentucky Derby eligibility points.

Needing some help to get in, the connections decided against taking a chance and entering. Instead, they pointed for the G1 Preakness at Pimlico and Social Inclusion finished third again despite making a menacing move in tandem with winner California Chrome.

The speedy runner finished third one more time in the G2 Woody Stephens at Belmont Park, a race in which future Breeders’ Cup Classic champion Bayern turned in one of the best performances all year.

In his final 2014 effort, the G1 Haskell Invitational last June, Social Inclusion stumbled at the start, made a mild move attempting to catch Bayern again and faded to seventh.

Hoping a trainer switch might help, Sanchez transferred the colt to trainer Chad Brown after the Haskell. They uncovered a tendon injury and subsequently put the horse on the shelf for the next few months.

Now the colt is back, and pointing to return at a racetrack where he still holds a 2 for 2 record.

Looking Back At the Los Alamitos Futurity and Ahead to 2015