Kentucky Derby 2015 Contender Leave the Light On: The Remsen Stakes is usually a decent indicator of future talented three-year-olds. Over the years, horses such as To Honor and Serve, Old Fashioned, Bluegrass Cat, Coronado’s Quest, Thunder Gulch, Go For Gin, and Pine Bluff have won the graded stakes in their first season on the track. The last Kentucky Derby winner that won the Remsen at two was Thunder Gulch, who on the 1995 Derby. Many years have passed since the Remsen winner has won the prestigious Kentucky Derby, but can the son of Horse Greeley, Leave the Light On, get it done? 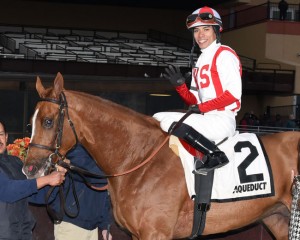 Leave the Light On and jockey Jose Ortiz crossed the finish line first in the Remsen Stakes at Aqueduct on Saturday, November 29, 2014 earning ten points on the 2015 Road to the Kentucky Derby.
Photo: Coglianese/NYRA

Over the Thanksgiving weekend, horse racing seems to be coming to a slow period, or to some, a standstill. Many of the graded stakes horses are put up for the winter and with the Breeders’ Cup over, the air is a little less enchanting. However, early handicappers and gamblers get their pens and paper out, bracing for the swarm of babies starting their careers.

Leave the Light On started his career on September at the lovely Belmont Park. However, in his debut, he finished a tired seventh, behind promising juvenile, Daredevil. Coming back a month later, the colt found his stride. He broke his maiden at Belmont Park in easy fashion going 8.5F (or 1 1/16 miles) on the main track, after the race had been taken off the turf. Trainer Chad Brown knows how to get juveniles ready for big races, as he won this years’ Juvenile Filly Turf on Breeders’ Cup day with Lady Eli. Seeing the potential in the 4 ¼ length score in the maiden race, Brown sent the inexperienced colt straight to the graded stakes ranking.

The Grade 2 Remsen Stakes is run the weekend after Thanksgiving and is one of the races colts can enter for a chance to earn early Kentucky Derby points. The points are distributed 10-4-2-1 to the top four finishers. Leave the Light On received 10 points for finishing first, Frosted earned 4, Keen Ice earned 2, and Classy Class earned 1 point.

Pedigree wise, Leave the Light On has a less than stellar pedigree. The United States doesn’t see a lot of graded stakes winners from the sire of Leave the Light On, Horse Greeley. The stallion stands at Claiborne Farms for $2,500 fee. His highest achieving sons are Clearly Now, G3 winner and G1 placed, Scotland, G3 placed, and Go Greeley, who was voted Canada’s 2013 Champion Two-Year-Old Male last year. Horse Greeley had a short race career, stretching over 2006-2007, where is did win the G2 Del Mar Futurity and place in the G1 Malibu Stakes. In his two wins, Horse Greeley went passed 7F. His progeny also have shown they are distance challenged.

Lantern Glow, dam of Leave the Light On, was unraced, but her sire, Mineshaft, was a phenomenal older horse. Beginning his career across the pond, in 2002, he did win his second start in a weight for age race, and then he did place in a group 3 event before traveling to Churchill to win an allowance in his first start in the US. His second start, he won an allowance race at the Fair Grounds. 2003 was Mineshaft’s year. He won 6 graded stakes, which included 4 grade one’s, 1 grade two, and 1 grade three. Mineshaft won races such races as the Pimlico Special, the Suburban Handicap, the Woodward, and the Jockey Club Gold Cup. Despite being retired before the end of the year, Mineshaft was voted Horse of the Year and Champion Older Male.

While Horse Greeley does not left a lot of stamina, Mineshaft passes down some. Mineshaft is the sire of ill-fated Nehro and sires Dialed in and Discreetly Mine. Lantern Glow was never races, but she does possess some quality stamina donors in her pedigree alone, including A. P. Indy, Seattle Slew, Secretariat, and Princequillo. Can Lantern Glow pass on enough of this stamina influence to Leave the Light On for him to be a contender, as the races get longer? Leave the Light On likes to run in front, as he has shown in his three starts. Will he be able to stretch his speed to 9 or 10 furlongs? Pedigree says no, but the racing world has seen plenty of horses outrun their pedigree, but Leave the Light On is going to have to prove it on the racetrack.