The Fasig-Tipton Sale takes place in Lexington, Kentucky on November 3, 2014.

Hip 21 – Weanling Colt – This colt is from the first crop of Bodemeister, runner up to I’ll Have Another in 2/3 of the 2012 Triple Crown campaign. The colt is out of a Medaglia d’Oro mare, which should indicate the colt will be able to carry himself over a distance when he grows up.

Hip 45 – Weanling Colt – This colt is from the first crop of multiple graded stakes winner Stay Thirty. The dam, Rhythm and Rhyme, by Unbridled’s Song, has a winner in France. The colt could take to either surface, based on pedigree, but will likely prefer dirt over a route of ground.

Hip 65 – Weanling Colt – This Street Cry colt is the first offspring of the champion grass mare Winter Memories. The colt should prefer grass marathon races. He has a lovely pedigree, and foreign interests may take an interest him here, if not, then possibly if and when he sells as a yearling.

Hip 89 – Hearty Laugh – This mare has quite a pedigree, and a successful female family. The Distorted Humor mare is out of Justenuffheart, by Broad Brush, which makes her half to stallion Lewis Michael and producer Dreaming of Anna. Adding to the successfulness of the female family is that Justenuffheart is half to Kitten’s Joy, champion sire. Heart Laugh is in foal on a May 25 cover by Candy Ride (ARG).

Hip 94 – Jojo Warrior – The Pioneerof the Nile filly has had some success this year, and would not surprise anyone if she stayed in training after going through the sale. She has a lovely pedigree, and being a racing or broodmare prospect, her new owners will have options.

Hip 105 – Littleprincessemma – Littleprincessemma’s value was boosted when her colt, American Pharoah became the favorite for the Breeders’ Cup Juvenile. Unfortunately, the colt was scratched with a foot bruise. The mare produced another Pioneerof The Nile foal this year, and is back in foal on a March 11 cover by Pioneer of the Nile. Needless to say, the breeders and owners believe the cross really works.

Hip 114 – Moyne Abbey – This Charismatic mare became a bit more valuable when her colt Wicked Strong began to emerge as one of the top three-year-olds of 2014. The mare should bring an honest price. She is in foal on a February 26 cover by Blame.

Hip 143 – Storm Dixie – The Catienus mare has a good female family, and has already proved that, when mated with a stallion of the A.P. Indy sire line, she can produce a winner. Her 2010 filly is now known as Princess of Sylmar. The mare is offered here, in foal on a March 14 cover by top sire Tapit.

Hip 141 – Stephanie’s Kitten – The Kitten’s Joy mare finally broke back through to attain another graded stakes win when she surged to the lead in the Flower Bowl (G1). She has been through a lot in her career, and if her new connections kept her in trainings, I would be a bit surprised.

Hip 173 – Blind Luck – This Kentucky Oaks winner is likely to bring a pretty penny. None of her offspring have races yet, but she does have a 2013 Bernardini filly and 2014 Giant’s Causeway colt. The multiple grade one winner mare is offered here, in foal on a March 11 cover by Midnight Lute.

Hip 185 – Discreet Marq – The pretty grey mare has been racing for a few seasons and has stamped herself a serious threat whenever she shows up. The mare has a beautiful pedigree, and would likely mix well with multiple sire lines. I expect this mare to be retired following her sale. 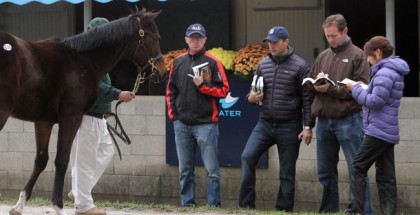 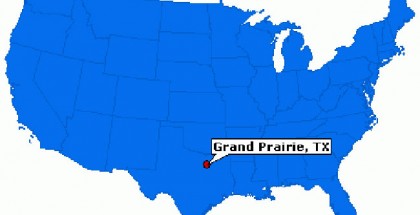 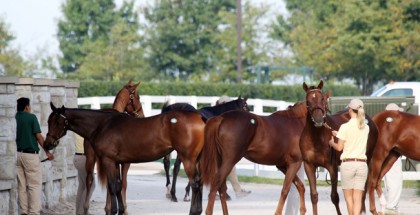