Santa Anita Picks & Plays for Saturday, October 25th, 2014: This weekend Sigi and I once again are going to take on Santa Anita and handicap four races including the (GIII) Autumn Miss Stakes for 3 year-old fillies going one mile on the grass for $100,000. We are gearing up for one more week until the Breeders’ Cup Challenge Races at Santa Anita starting on Friday, October 31, and Saturday, November 1, 2014. 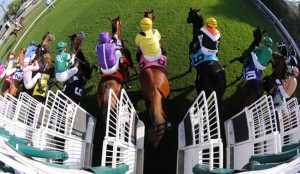 Last weekend we ‘capped races 2-5 including the California Flag Handicap on the downhill turf. We nailed all four races and I hit a $6.00, $.50 pick4 for $99.20. Thanks to Sigi for picking the winner, My Samurai Warrior in the first race as my pick, Heir Of Storm was third. Good thing I combined our plays. In the California Flag, my top pick Boozer won by 2 ½ lengths and hit his first Stakes race, so I was very happy for his connections. The next race Sigi’s single hit, which was my second pick, Watdifrenzdzitmake, who stumbled at the start and still powered home for her maiden score. Then the third race, his top pick, and again my second pick, Industry Leader won, and also stumbled at the start to recover well. The #4 won 3 races in a row and capped of a nice p4. Nice pickin Sigi! You are on fire again.

This weekend we are handicapping races 6-9 including the (GIII) Autumn Miss Stakes which is the 8th race of the day. So here we are again, time to go Toe-To-Toe, let’s roll.

Conquest Two Step: Has done nothing wrong for the Casse barn. If he can break quicker from the gate, as last time was tardy and came in second at this distance, it’s lights out with Talamo riding. Also has a smokin hot work lately. Back off Buddy: Taking a shot with this guy who has never raced on the grass. Tale of the Cat son, Dam has produced two turf winners and has some sharp recent works. Gets Espinoza from the rail.

Eddies First: Have had in VS since he set the track record going downhill on the turf May 11th going 6 1/2f. Has yet to repeat but gets some class relief here and we’ll see if he can repeat. Kill Shot: Has a race record of 4:1:2:1 so never off the board. Last raced 11/9/13 and was 3rd behind Big Macher and we know where Big M has gone from there. Get’s Smith up to ride and is fast! Some killer works since August. Run boy run.

Diversy Harbor: According to connections seems to have matured. Have been on her last few races so I’ll give her another shot here. Has race record of 7:2:2:1 this year. Last out August 16th in the Del Mar Oaks she had the rail and made a late bid to finish 6th. July 19th finished 4th in the San Clemente Handicap at Del Mar going a mile on the turf. She wasn’t off the board before those last two starts. Let’s go Curlin girl so our friend @rogueclown can have a hay day!

Sheza Smoke Show: Sigi nailed her back on June 28th where she won going a mile on the turf in the Senorita Stakes. Last out she was 4th at Del Mar in the Sandy Beach Handicap. She has 3 wins at Santa Anita and loves her track so she will be on my ticket this time.

Alexis Tangier: Looks to bring it again for the Mandella barn. She is another girl we hit in a pick 3 a few races back. Last out on September 27th won the Unzip Me Stakes at Santa Anita going 6 1/2F on the downhill turf, beating out Gender Agenda who she faces again. She is coming off a two race win streak at Del Mar, where on August 20th she won going a mile on the turf there by 2 1/2 lengths. She’ll be tough but needs to step it up here.

Lexie Lou: Has a race record of 6:3:1 this year. Last out was a headscratching 10th in the (GII) Canadian Stakes at 1 1/8 on the grass where she just seemed to give up. Prior was on a 3 race win-streak including the Woodbine Oaks, Queens Plate and Wonder Where Stakes. Can she bring it to the table cutting back in distance here? I’m not hot on Nakatani at this meet and she doesn’t have many works so a slight question on her conditioning but she’s the bomb!

Tashas Courage: This 4 year old gelding has 10 races under his belt and last out was 3rd on October 4th at Santa Anita going 5 1/2 f. He is barking up the tree for a win. Prior was 2nd at Los Al and two 3rds, one at Del Mar and one at Santa Anita in June. Hoping this Medaglia d’Oro guy can win. He gets Bejarano up, so why not? Divine Vision: Blinkers on, lightly raced with 2 times out and both 8th place finishes. Here’s to hoping the hood helps with the Sadler/Baze combo going on.

Conquest Two Step is definitely the horse to beat in this downhill race, because he was a little slow at the start and was able to finish second behind Betty’s Bambino, a horse that looked unbeatable that day. Conquest Two Step is working like a freak and looks like a single, but he usually has troubles at the start, so I’m trying to beat him. Heat Flash, is a horse who faced good runners in the past and should improve with the blinkers added. I’m drawing a line to his last race, because was a 4 horses field. Horse Laugh has good races in the downhill and also recorded good workouts since his last effort.

Eddie’s First is dropping in class and looks like the speed of the speed. The dirt is not a concern because he has a great race at Los Alamitos Race Course and he also has great works in Santa Anita. In my opinion, his going to take the lead and never look back since nobody can follow him. I using this guy as a single.

Diversy Harbor is the class of the field, maybe the distance is a bit short but she is so talented and can win this race coming from the clouds. Alexis Tangier is one of my favorite turf fillies and i expect a bright future for her. She’s moving up in class, but the way she handle the grass gives her a great shot in this field. Sheza Smoke Show is able to stalk the pace; if the pace turns hot she can win with good odds.

Takeit Tothe Limit will try to wire the field, now with Drayden Van Dyke in the saddle. Tasha’s Courage has good races in this level, and looks ready to brake his maiden.

Related Links:
Five things to do at Santa Anita Park